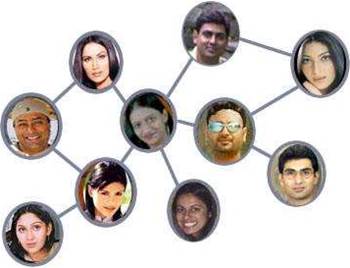 An analysis of Microsoft’s instant messaging system has concluded that there aren’t six degrees of separation between everyone -- the number is 6.6.

A team of researchers analysed 30 billion messages sent on the company’s instant messenger client to see if the theory that everyone can be linked to everyone else by six degrees of separation was accurate.

"To me, it was pretty shocking. What we're seeing suggests there may be a social connectivity constant for humanity," Eric Horvitz, a Microsoft researcher who conducted the study with colleague Jure Leskovec, told the Washington Post.

"People have had this suspicion that we are really close. But we are showing on a very large scale that this idea goes beyond folklore."

The six degrees of separation argument, popularised by American psychologist Stanley Milgram, posits that everyone is one degree removed from people they know, two degrees from people their friends know and no more than six degrees away from everyone on the planet.

The idea has been around for nearly 100 years but has never been proven due to the difficulties of testing the hypothesis.

The Microsoft team came up with using data from their Messenger client. The researchers took an IM message between two unnamed individuals as a link and then examined how to connect 180 billion different pairs of users in the database

They found the actual number of links was 6.6, although 78 per cent of the world’s population can be linked in seven steps or less. However some took over twenty links to find a connection.
Got a news tip for our journalists? Share it with us anonymously here.
Copyright ©v3.co.uk
Tags:
degreesdisprovesmicrosoftofseparationsixsoftwarestudy