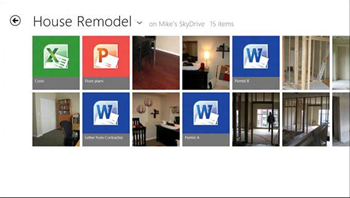 Microsoft has announced plans to revamp its web-based data storage platform SkyDrive such thart it can be the default "device cloud" for all apps and files on a Windows 8 machine.

The SkyDrive app, which will be featured in the Consumer Preview edition of Windows 8, will replace the SkyDrive.com web site as the primary management interface for files stored in Microsoft-operated cloud.

The best features of Apple's iCloud....

SkyDrive will be integrated with every Metro style app on Windows 8, allowing the user to open and save files, such as photos and documents, directly to the cloud in a single click.

Microsoft thus hopes to eliminate configuration barriers for cloud storage - with the only set up being the registration of an email address on a PC that's running Windows 8. The process will give Windows 8 owners access to those files across all their devices, in much the same fashion as Apple's iCloud service.

Microsoft has told developers of Windows 8 apps that their wares will be supported so long as the app supports opening and saving documents and photos.

... with the best features of DropBox

Microsoft will also release a SkyDrive desktop app for Windows 8, 7 and Vista, which will support drag and drop and offline access as well as Windows Explorer file management. Users will need to select a folder that synchronises with SkyDrive and updates changes on the go.

The largest file that users can upload will be 2GB.

Windows users will be able to choose to gain remote access to these files, plus the ability to stream files through SkyDrive.com.

"Knowing that most people would still have files on a remote PC that weren’t available through SkyDrive, we built a new feature that allows you to “reach across” the Internet to access any file, stream videos, or view photo albums from a remote PC that is running SkyDrive on the desktop," explained Mike Torres and Omar Shahine, group program managers for SkyDrive on the Building WIndows 8 blog.

For any remote folder or file, users can also choose to “copy to SkyDrive,” so that they will always have it across all Windows devices, the company said.

Microsoft's SkyDrive cloud currently hosts around 10 petabytes of data. The company now envisages it will scale up to over 100 PB.