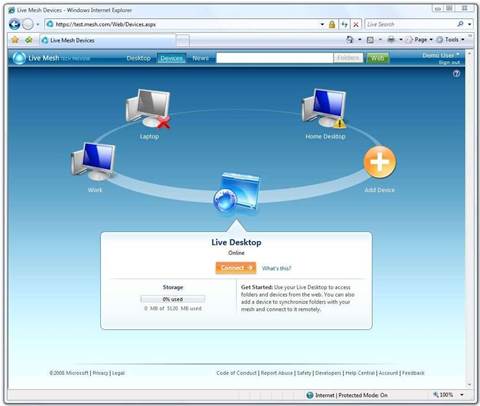 Microsoft has briefly peeled back the covers on mobile integration in its Live Mesh platform with a short demonstration at Tech Ed 2008.

The functionality is the much-anticipated missing link for Live Mesh. It is not expected to be launched officially for at least another few months, according to Amit Mital, general manager of Live Mesh and developer platform at Microsoft.

There was no word on when mobile device capabilities would be added to the current beta, which was opened to Australian users several weeks ago.

Mital claimed that this decade in computing would be synonymous with the acceptance of cloud computing and what Microsoft calls software plus services.

The company was very keen to define the concept as more than software-as-a-service, encompassing also SOA and web 2.0 functionality across a ‘mesh’ of access devices and delivery modes.

“For the choice of delivery to be real, we need good federation [capabilities] so that on-premise and third-party hosted applications can talk to each other,” Mital told delegates.

“We also need a choice of business models - we need subscription and ad funded models to be concurrently supported [to make the software plus services vision a reality].”

Streetadvisor, a website dedicated to helping people find places to live, showed how it has integrated Windows Live services including Live ID authentication, presence, instant messaging and Virtual Earth mapping into its site.

The company swapped out Google Maps in the process and moved to a .NET-based architecture.

Users of the site do not need to have Live messenger installed locally on their machines to be able to chat to other site users.

A second partner, The Online Group, showcased a smart asset tracking solution that Antarctica New Zealand will use to track vehicles out in the field and log and apportion maintenance requests.
Got a news tip for our journalists? Share it with us anonymously here.