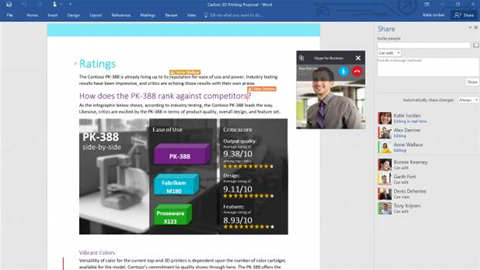 Microsoft which has worked on shifting its customer base to a software subscription model will this year release two new standalone versions of its flagship Office productivity suite, the company announced.

Jared Spataro, the company's vice-president in charge of the Microsoft 365 offering, said a commercial preview of Office Long Term Servicing Channel aimed at enterprise customers will be released in April this year.

The LTSC version follows Office 2019, which was announced in 2017 and released in 2018, and which was expected to be the last, standalone "perpetual licence" version that can be installed on a single computer only.

"We have built Office LTSC for a limited set of specific situations: regulated devices that cannot accept feature updates for years at a time, process control devices on the manufacturing floor that are not connected to the internet, and specialty systems that must stay locked in time and require a long-term servicing channel," Spataro said.

Since Office LTSC won't have acces to the cloud, Spataro said it will only have a subset of the features included in Microsoft 365 apps.

Accessibility and performance improvements are included in Office LTSC, along with new features such as Dynamic Arrays and XLOOKUP for the Excel spreadsheet.

Skype for Business will be cut from Office LTSC, however, and be replaced with Microsoft Teams.

Customers wanting to continue with Skype for Business can get it from Microsoft's Download Centre.

Dark mode will also be available for Office LTSC.

Although Spataro called Office LTSC "the next perpetual release", the productivity suite will be supported for five years and not in perpetuity as the name might imply.

Pricing is yet to be confirmed but Spataro said the Office Professional Plus, Office Standard and individual apps will go up in price by ten percent.

Office LTSC won't be the last standalone version either: Spataro confirmed that Microsoft is committed to a future release of the productivity suite.

The release date for Office LTSC is yet to be confirmed, but will coincide with that of Windows 10 LTSC, expected to be generally available sometime in the second half of 2021.

As announced in September last year at Microsoft's Ignite conference, there will also be 32 and 64 bit Office 2021 versions for personal and small business use released this year, also with five year's worth of support.

He added that unlike the LTSC verslon, the price for Office 2021 personal and small business which will run on Windows PC s and Mac won't go up.