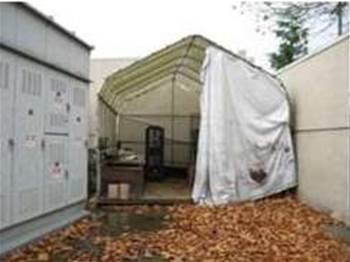 Microsoft has announced that it will open a new data centre in Washington State housed in a "modern" barn-like structure that is "virtually transparent to ambient outdoor conditions".

The new data centre will be built adjacent to an existing facility at Quincy, a small town that apparently has the advantage of cheap power generated from the Columbia River.

General manager of data centre services Kevin Timmons said that the radical building design would allow Microsoft "to essentially place our servers and storage outside in the cool air while still protecting it from the elements".

"The interior layout is specifically designed to allow us to further innovate in the ways that we deploy equipment in future phases of the project," he said.

"And, like any good barn, the protective shell serves to keep out critters and tumbleweeds."

Timmons said the inside of the centre would be completely modular – from electrical and mechanical through to server and security subsystems.

He claimed the building block design would cut capital expenses associated with the project in half.

It was not the first time Microsoft had toyed with the idea of a data centre without walls. In September 2008, it successfully ran a stack of HP servers in a tent for seven months with no failures.

Timmins said other modular data centers were to be built in Virginia and Iowa later this year.