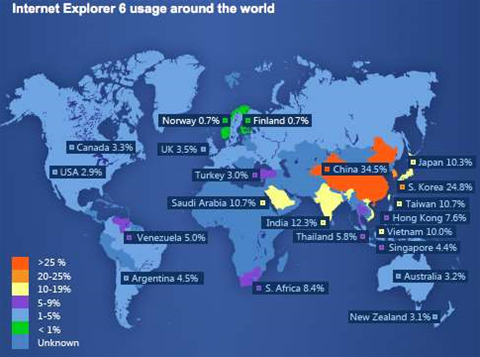 Microsoft has launched an Internet Explorer 6 countdown page in an effort to banish the browser from the web by singling out the nations that still relied on it.

The vendor hoped the campaign would help push IE6 usage below 1 percent worldwide.

“We know that web developers are spending too much time supporting Internet Explorer 6,” Microsoft noted on the support page.

The transition away from IE6 was happening gradually, falling 9 percent last year to 12 percent of all browsers used to interact with the web.

A third of IE6 users came from China, representing just under 6 percent of all browsers in the world, according to Net Applications statistics.

South Korea was close behind China with a quarter of its users still on IE6, while India, South Africa, Vietnam, Taiwan and Japan all had close to 10 percent. In Australia and New Zealand, about 3.2 percent and 3.1 percent of web users respectively remained on IE6.

Microsoft promoted the security and privacy benefits of using IE7 or IE8, but according to analyst firm, Gartner, there are a few significant barriers that stood in the way of enterprises making the switch.

Another group that apparently does not want to see the end of IE6 was the security vendor community.