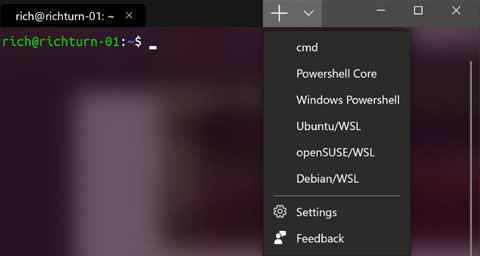 Microsoft has released several new tools for developers and administrators at its Build 2019 conference, including the next version of the Windows Subsystem for Linux and open-sourced its command line consoles with a

As part of the speed boost, Microsoft intends to ship WSL 2 with a specially tuned Linux kernel for full system call compatibility.

Initially, WSL 2 will come with Linux kernel version 4.19 and is scheduled to appear as a preview later this year.

Linuxistas using Windows have long complained about the lack of a fully-fledged command line shell, something Microsoft is seeking to remedy with the Windows Terminal application.

Microsoft has decided to open source the whole Windows Console as well Terminal, including the older Command Prompt (cmd) and Powershell environments.

Windows Terminal is currently available as an early preview and sports a user interface with tabs and tear-off windows, which Linux and macOS equivalents have had for several years.

Emojis and full Unicode character sets with ligatures are supported, along with shortcuts. The Terminal user interface can be themed and extensions added.

Fonts, emojis, icons and symbols in Windows Terminal are rendered with the computer's graphics card.

Microsoft also released a native Windows version of the React Javascript library for building user interfaces, and showed off new features for its Edge web browser that is now built on the Chromium open source code base.

The next version of Edge will come with Collections to organise and export data from the web, more fine-grained privacy tools, and add the Chromium DevTools for coders.