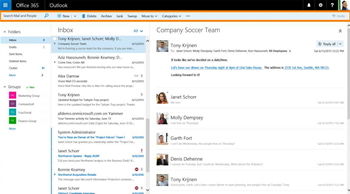 Aims to make it sleeker, easier to use.

The company has redesigned Outlook on the web - formerly known as the Outlook Web App - to make it cleaner and easier to access features like archiving and moving messages, and bring it closer to the Outlook.com freemail app.

Among the new features is an 'action' toolbar that covers mail, calendar, people and tasks, and which offers quick access to commonly used commands like search.

A new 'pin' features allows users to pin an email to the top of their inbox and highlight it to ensure important messages don't get buried.

Microsoft has also brought its 'Sweep'  feature from Outlook.com to the Outlook web app. Sweep lets users manage emails from specific senders and is aimed predominantly at uncluttering inboxes from newsletters, digital coupons and other types of regular email.

Outlook on the web gets a dedicated 'undo' button as well as one-click archiving, and has improved single line view to include a preview of message contents inline with the subject.

Users can now resize and customise images within email, and Microsoft has also added suggested recipients within the 'to' field based on the user's most commonly emailed people and groups.

The calendar now includes a five-day weather forecast, separate birthday and holiday calendars, and the ability to create email reminders for upcoming events.

Users on Office 365 plans which include Exchange Online, and who have opted into Microsoft's first release program, will begin seeing the changes today.

Other users will receive the update version of Outlook on the web from the first week of September.