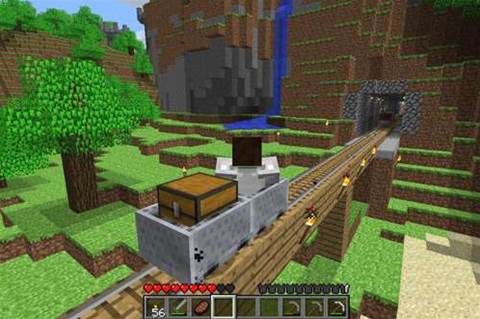 Microsoft has agreed to acquire the Stockholm-based developer of the popular Minecraft video game for US$2.5 billion (A$2.8 billion), as it tries to lure a new and mostly young audience into its mobile world.

Minecraft - a construction game in which players can build nearly anything imaginable, block by block, in a digital, Lego-like world - has spread like wildfire since its full release by developer Mojang in 2011.

Minecraft is the top paid-for app both on Apple's iOS and Google's Android systems and helped Mojang, which employs just 40 people, bring in US$287 million in revenue in 2013, giving it an US$126 million operating profit for the year.

While the Mojang team will join Microsoft studios behind global franchises such as "Halo" and "Fable", its three co-founders, who have been chased by the likes of Napster co-founder and early Facebook investor Sean Parker, will be leaving to start new projects.

As if to erase any doubts about the importance of gaming, Microsoft CEO Satya Nadella said it was a "top activity" spanning devices from PCs and consoles to tablets and mobiles, with billions of hours devoted to it each year.

"Minecraft is more than a great game franchise – it is an open world platform, driven by a vibrant community we care deeply about, and rich with new opportunities for that community and for Microsoft," Nadella said in a statement.

Microsoft has spent lavishly in the Nordic region in recent years, buying the handset business of Nokia for US$7.2 billion in a deal which closed this year. In 2011, it spent US$8.5 billion on Skype, which has its roots in Scandinavia and the Baltics.

Some analysts were positive about the acquisition.

"The news robustly dismisses the idea that games are no longer at the core of Microsoft's strategic direction and also underlines the growing importance of independent titles alongside big-budget games," Piers Harding-Rolls, head of games at IHS Technology, wrote in a note.

FBR Capital Markets said the deal gave Nadella "the right product at the right time," as Microsoft invests in its Xbox strategy and moves into the intensely competitive mobile phone sector with Nokia under its hood.

Not about the money

News of the Microsoft deal surprised some Minecraft players who know Persson, or "Notch" as he is commonly known, more for his anti-big business stance. But he explained the reasons behind the deal in a blog shortly after the deal was announced.

"As soon as this deal is finalised, I will leave Mojang and go back to doing Ludum Dares and small web experiments. If I ever accidentally make something that seems to gain traction, I'll probably abandon it immediately," Persson said in a blog post.

"I love you. All of you. Thank you for turning Minecraft into what it has become, but there are too many of you, and I can't be responsible for something this big. It's not about the money. It's about my sanity."

Notch, 35, owns 71 percent of Mojang through his company Notch Development AB and stands to become a billionaire if the deal goes through. JP Morgan was the sole advisor to Mojang on the sale.

Analysts have said Microsoft's purchase of Mojang is more aimed at pulling users onto its mobile platform than its better known PC system or Xbox game console.

Minecraft was launched as a PC game, but about 40 percent of copies are downloaded onto phones and tablets.

In accounting terms, Microsoft expects the acquisition, which should close late in 2014, will break even in its current 2015 fiscal year.

A US$2.5 billion deal for Mojang, or about 8 times sales last year, is small change for Microsoft, which has US$86 billion in cash and short-term investments. But it is relatively large and expensive for game company acquisitions.

Japan's SoftBank paid US$1.5 billion for a 50 percent stake in Finland's Supercell last year at about 3.5 times projected annual sales. Electronic Arts's US$750 million acquisition of PopCap in 2011 was valued at around 10 to 11 times sales.