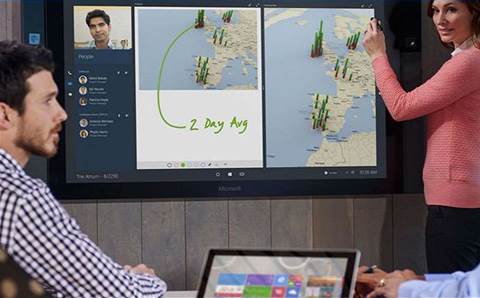 Microsoft has revealed it will not ship its Surface Hub in September as originally planned, and is declining to provide a new shipment date.

High demand was blamed for the delay to the launch of the interactive whiteboard, as Microsoft is now "tuning our manufacturing process to prepare for production at broader scale".

"To do this, we are adjusting our product rollout schedule to ensure we deliver a great customer experience and set our partners up for success," Microsoft's Surface general manager Brian Hall wrote in a blog.

"We will not start shipping on September 1 now. We’ll have more details on our updated shipment schedule in early August. In the meantime, we will continue to take pre-orders."

Microsoft first announced the Surface Hub in June, with Telstra and Pro AV Solutions as the two Australian partners.

Integrating video-calling and note-taking onto a touch screen, the Surface Hub traces its roots back to products made by Perceptive Pixel, an Oregon-based company Microsoft bought in 2012. Microsoft unveiled a prototype of the new device in January.

It was another step into high-tech hardware for Microsoft, an arena it first entered with Xbox and then followed with the Surface tablet in 2012 and Windows Phones, and will continue with the much-hyped HoloLens.

During the conference, the tech giant also debuted a new Office 365 enterprise suite, dubbed E5, which will launch before the end of the year.

E5 pricing was not revealed.

Microsoft also said it was shutting down the E4 bundle.

"E4 is very on prem-oriented so [E5] is not really replacing but we will work hard to provide pathways for customers to go from E4 to E5," Tanuj Bansal, senior director of Office 365 channels, said.

The company similarly made noise about a new service it is calling Project GigJam, a collaboration solution that aims to allow people to work across devices and applications.

The service - which is not yet available - presents as a screen-sharing application but needs to be integrated with the relevant applications to summon the right data.

"What’s truly needed is a way for people to spontaneously divvy up the information and actions needed to get work done, to keep track of each part, and bring it all to closure with others," Microsoft wrote in a blog post.

"A physical therapist who previously worked alone to create a rehab protocol now involves the patient and the patient’s family (each interacting from their own devices), all the while making sure that sensitive physician’s notes and the patient’s records are appropriately shielded."

Microsoft is encouraging interested parties to apply for the preview of GigJam, which will be available in the coming months.

Steven Kiernan is a guest of Microsoft at the Worldwide Partner Conference.