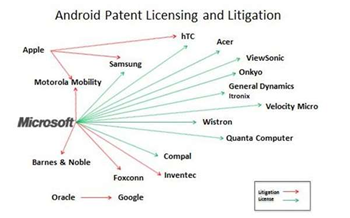 ﻿Microsoft has signed an Android licensing deal with Taiwanese electronics giant Compal, bringing its coverage of original design manufacturers to 55 per cent.

The biggest of those manufacturers is Taiwanese company Quanta, which struck an Android licensing agreement with Microsoft earlier this month.

"Today’s announcement means that companies accounting for over half of all Android devices have now entered into patent license agreements with Microsoft," Microsoft’s executive vice president and general counsel Brad Smith and deputy general counsel Horacio Gutierrez said in a joint post on Sunday.

Compal covers 16 percent of worldwide revenue for the original design market, while Quanta accounts for 25 percent, according to Microsoft.

“Compal is based in Taiwan, where it produces smartphones and tablet computers for third parties and has revenue of roughly $28 billion per year,” the pair pointed out.

Details of Microsoft’s agreements with Android device suppliers and brands have not been disclosed, however figures for Samsung were rumoured to be as high as $US15 for each Android device.

The deal with Samsung gave Microsoft 53 percent of the US original equipment manufacturer market that sell their own brands of Android devices.

Those locked in litigation with Redmond include Motorola Mobility, Foxconn and Inventec.

Microsoft's legal counsel said the agreements were “reasonable and fair to both sides”.

“Our agreements ensure respect and reasonable compensation for Microsoft's inventions and patent portfolio. Equally important, they enable licensees to make use of our patented innovations on a long-term and stable basis.”

Nine Android licensees have acquiesced to Redmond’s patent demands in the past four months, including HTC and Acer amongst others.