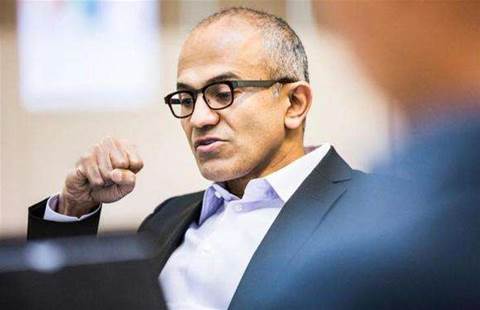 Defers further detail until next week.

Microsoft CEO Satya Nadella has declined to provide detail on widely expected job cuts at the software company, despite circulating a memo to employees promising to "flatten the organisation and develop leaner business processes."

Nadella said he would address detailed organisational and financial issues for the company's new financial year, which started at the beginning of this month, when Microsoft reports quarterly earnings on July 22.

"There will be many opportunities for me to talk more about our specific fiscal plans on the 22nd," Nadella said.

Since absorbing the handset business of Nokia this spring, Microsoft has 127,000 employees, far more than rivals Apple and Google  Wall Street is expecting Nadella to make some cuts, which would represent Microsoft's first major layoffs since 2009.

"With recent chatter on the Street about potential head count reductions at Microsoft it was important for Nadella to be visible and set an optimistic tone heading into the next few months, especially on the heels of the Nokia integration," said Daniel Ives, an analyst at FBR Capital Markets.

In a 3105-word memo sent to employees today and posted on Microsoft's website, Nadella set out his vision for the company five months after taking over as CEO from Steve Ballmer.

Most noticeably he described Microsoft as a "productivity and platform company" focused on mobile and cloud computing, a subtle advance on Ballmer's reinvention of Microsoft as a "devices and services" company, which could signal less emphasis on manufacturing devices.

Nadella did not go into detail about specific changes he planned for Microsoft, but signalled that change was needed.

"Nothing is off the table in how we think about shifting our culture to deliver on this core strategy," Nadella wrote in the memo.

Nadella said he had asked his senior leaders to "evaluate opportunities to advance their innovation processes and simplify their operations and how they work."

He did not discuss in great detail individual businesses, but did say he was committed to developing the Xbox gaming platform, pouring water on persistent talk that the unit might be spun off.

He did not address the unprofitable Bing search engine directly in the memo - which some investors have called for Microsoft to ditch - but did not indicate that he was thinking of backing away from it in an interview.

"To me, Bing is a much more core productivity technology, it's task completion in its essence," Nadella said in a separate statement. "That's one of the reasons why internally we get that a lot more than externally."

Microsoft shares rose slightly to US$41.90 on Nasdaq, and are up 12 percent year to date on the back of renewed confidence in the company under Nadella's leadership. The stock hit a 14-year high last month, the highest since the tech-stock bubble of 2000.