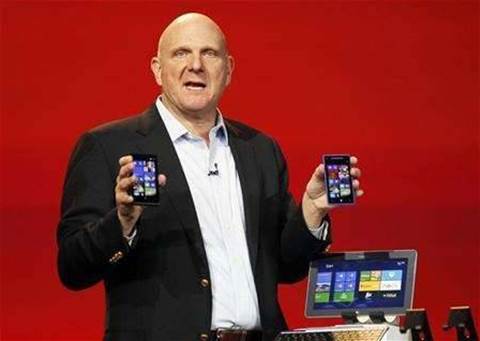 Microsoft CEO Steve Ballmer is not the right leader for the world's largest software company but holds his grip on it by systematically forcing out any rising manager who challenges his authority, claims a former senior executive who has written a book about his time at the company.

"For Microsoft to really get back in the game seriously, you need a big change in management," said Joachim Kempin, who worked at Microsoft between 1983 and 2002, overseeing the sales of Windows software to computer makers for part of that time.

"As much as I respect Steve Ballmer, he may be part of that in the end."

As a senior vice president in charge of a crucial part of the company's business with direct access to co-founder Bill Gates, Kempin is the most senior former Microsoft executive to write a book critical of the company, which is famous for the loyalty of its ex-employees.

His criticism echoes that of investor David Einhorn of Greenlight Capital, who called for Ballmer to step down in 2011.

Kempin left Microsoft under a cloud in 2002 as some of the aggressive contracts he crafted with PC makers were seen as fodder for the US government's antitrust prosecution of the company, which started in 1998 and was largely resolved by 2002.

His book, titled 'Resolve and Fortitude: Microsoft's "secret power broker" breaks his silence', is scheduled to be published on Tuesday. He talked with Reuters by phone on Monday.

Kempin charges Ballmer with purposefully ousting any executives with potential to wrest him from the CEO seat, which he has occupied since 2000.

He said he saw the process first with Richard Belluzzo, a former Hewlett-Packard executive credited with launching the Xbox game console who rose to chief operating officer at Microsoft but left after only 14 months in the post, in the same year Kempin left.

"He (Belluzzo) had no room to breathe on the top. When you work that directly with Ballmer and Ballmer believes 'maybe this guy could someday take over from me', my God, you will have less air to breathe, that's what it comes down to."

Several leading executives, touted by outsiders at one time or another as potential successors to Ballmer, have left the company in the last few years, most recently Windows unit chief Steven Sinofsky, who departed in November.

"Ozzie is a great software guy, he knew what he was doing. But when you see Steve (Ballmer) and him on stage where he (Ozzie) opposed Steve, it was Steve's way or the highway," said Kempin.

Kempin said he spoke to Ballmer around two years ago and expressed his concerns about his management style and direction of the company, but has seen no changes since. He said he sent Ballmer and Gates copies of his new book but has yet to get a reply.

"Steve is a very good business guy, but make him a chief operating officer, not a CEO, and your business is going to go gangbusters," said Kempin. "I respect that guy (Ballmer), but there are some limitations in what he can and can't do and maybe he hasn't realized them himself."

In his book, Kempin writes about how Microsoft foresaw the major moves in technology in the last decade, but bungled its entry into tablets, phones and social media, ceding leadership in the technology world to Apple and others.

"They missed all the opportunities they were talking about when I was still in the company. Tablets, phones...we had a tablet going, we had tablet software when Windows XP came out, it was never followed up properly," said Kempin.

He also claims the decline of PCs is partly due to Microsoft's mismanagement of hardware makers, an area that Kempin oversaw at Microsoft.

"Just think about the insult of Microsoft coming out with a tablet themselves, trying to mimic Apple, and now they are going to come out with a notebook on top of it," said Kempin, referring to Microsoft's Surface RT tablet and soon-to-be-released Surface running Windows Pro.

Several PC makers went public with their unease about Microsoft's decision to make its own computers last year.

Kempin reserves his most pointed criticism for Ballmer.

"Is he a great CEO? I don't think so. Microsoft's board is a lame duck board, has been forever. They hire people to help them administer the company, but not to lead the company. That's the problem," said Kempin.

"They need somebody maybe 35-40 years old, a younger person who understands the Facebook Inc generation and this mobile community. They don't need this guy on stage with this fierce, aggressive look, announcing the next version of Windows and thinking he can score with that."