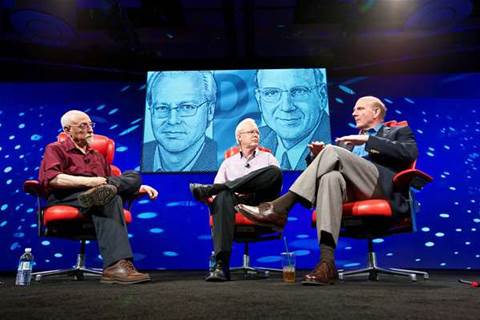 Steve Ballmer and Ray Ozzie go on the record at D8.

Steve Ballmer and Ray Ozzie, Microsoft's chief executive and head software architect, have been expounding on the current state of play in the IT market at the All Things Digital (D8) conference.

In their keynote session both were adamant that Microsoft's future is working with the cloud. Ballmer said that moving Microsoft into addressing the cloud was a transition from a computing world that is good for the company to an environment that could be much better.

This would lead to new competitors he acknowledged, but the company had faced a similar challenges from Linux and OpenOffice ten years ago and was still prospering. He identitfied Google, Apple, Oracle and VMWare as key competition as well.

“So now we've got new competition in some areas where we've been strong. It's our job to out-work them, out-innovate them and out-hustle them and go get our job done, and we've got good competition,” he said.

Ozzie was more taken with the opportunities in the cloud for managing client synchronisation. People wanted an appliance, be it tablet or whatever he said, to come out of the box, connect to an application online and to have their cached data downloaded to customise the device.

There was much debate about Apple and the impact of the iPad. Walt Mossberg, chair of the session, asked if they considered the iPad was a PC. Ballmer said it was but had serious limitations, such as taking notes as he saw one attendee trying to do yesterday.

While Microsoft would be on tablet devices in the future Ballmer said, he was expecting PC use to carry on growing and general purpose devices, those with serious graphics and storage hardware, would remain the norm. He was dismissive of the Mac platform, saying that while the company had had a great last quarter its market share was still 'minimal' and not growing.

Ozzie felt a number of form factors were going to emerge, including the tablet, a smaller handheld pad and a variety of other designs. However there were key differences in how people used devices, for both for consumption but also for data generation, and a successful device would need to address both areas.

In the mobile space Ballmer said that Microsoft had missed a cycle of development and had gone from being ahead of the game to being behind the market leaders. He had moved to shake things up and was now managing the bosses of the mobile team personally.

“We're dealing with the fact that we're no longer at the front of that pack but it's a very dynamic business,” he said.

“The market leaders have shifted over twice, even in the last five or six years. The fact the market is dynamic we have to view as our opportunity.”

RIM was a good competitor he said, and had done well to address the consumer space, with that sector taking over half of RIM's unit volumes, making it no longer an enterprise company. However, as a platform RIM was the least robust in the industry.

Nokia was big he said, but it was easy to forget that since it had no market share in the US. The company was trying to get its act together on the software front, and Microsoft was collaborating with them in a few areas, but time would tell.

As for Google's entry into the market, Ballmer said it was needlessly complex, with the separate Android and Chrome operating environments. Ozzie felt that Chrome was more suited to the cloud environment of the future.

Finally, during the Q&A sessions Ballmer was asked about his company's involvement in China. He said that it was more effective to stay in the market and be part of the "reformation process" and Microsoft's decision to stay in the country was a “principled stand.”

Got a news tip for our journalists? Share it with us anonymously here.
Copyright ©v3.co.uk
Tags:
ballmer cloud company market microsoft software