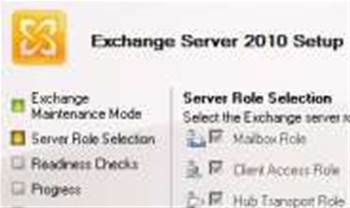 Microsoft has announced the worldwide general availability of Exchange Server 2010, as well as the Forefront Protection 2010 package - designed to offer security to the server.

The Redmond giant's business division president Stephen Elop claimed that the return on investment for a deployment was around six months.

“Some of our customers are already reporting cost savings of 70 percent on the old Exchange environment,” he said.

These figures can be explained by several innovations to the Exchange package, according to Elop.

Modifications have been made to the disk drive technology used with Exchange to store user accounts.

He said: “We are giving customers the opportunity to take low-cost disk drives and plug them directly into the Exchange server. In the past, customers would have invested in storage area networks (SANs), to provide Exchange’s storage requirements.”

He added: “We’ve also introduced advanced archiving capabilities that allow people to store information for longer and be able to retrieve it more quickly via a search that spans multiple mailboxes – all within Exchange. This means companies won't need to buy additional software for that purpose.

"The server is also cost effective because of the users' ability to to use Exchange as the single inbox for all forms of communication – including voicemail.”

In addition, Exchange also has speech-to-text conversion technology that allows voicemail to be converted to a text file and read from mobile devices, explained Elop, who added that firms could also save money through retiring old, legacy voicemail systems.

Got a news tip for our journalists? Share it with us anonymously here.
itweek.co.uk @ 2010 Incisive Media
Tags:
2010announcesavailabilityexchangemicrosoftofsecuritysoftware