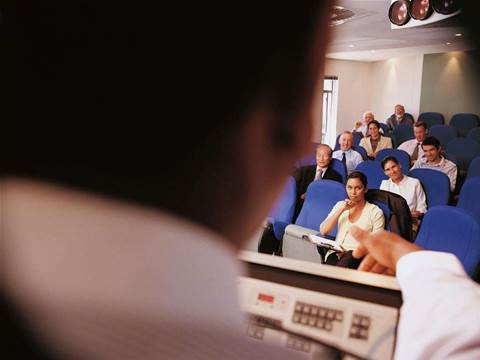 Jeff Raikes, business division president at Microsoft, said in March that 100 million people - twice the number of current business VoIP users - will have the ability to make calls from Microsoft Office applications within the next three years.

The 15 devices to be shown today include hybrid phones which can connect to OCS 2007, and use a conventional PBX voice network, PC-dependent handsets and headsets and fully integrated systems.

For example, Samsung has built a monitor with camera, speakers and microphone which can be used as a conventional PC desktop screen and a calling device.

Bluetooth headset maker Jabra is offering a hands-free earpiece, while Asus is showing off an OCS-compatible laptop equipped with camera, speaker and microphone.

Other partners include Vitalix, Polycom, Plantronics, Tatung, NEC and a joint venture between LG and Nortel.

"Users should be free to use any device," he said.
Got a news tip for our journalists? Share it with us anonymously here.
Copyright ©v3.co.uk
Tags:
adds comms hardware microsoft strategy to unified