Microsoft a “no-show” at CeBIT 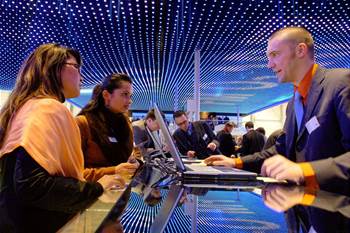 Still, show organiser Hannover Fairs has managed to attract some big-name vendors that have previously declined to participate in the trade show which landed here in 2001.

A spokesperson for Microsoft Australia said the company would not be at the show, instead focusing its resources on the forthcoming launches of Office 2007 and Windows Vista.

So far 18,000 people had pre-registered to attend with Hannover expecting 30,000 to walk through the door, Taranto said.

“If there wasn’t interest in the reseller market, you wouldn’t have companies like NEC coming in for the first time,” Taranto said.

Despite the cost of hiring the Convention and Exhibition Centre in Darling Harbour, Sydney increasing 20 percent in the past two years, Hannover had not made any changes to exhibitor pricing this year, Taranto said.

Any increase in exhibitor costs compared to last year were only based on the consumer price index (CPI), she said.

This year's CeBIT will focus heavily on technologies such as open source, wireless and mobile TV, Taranto said.

Around 20 vendors would also be exhibiting at an “open source” section of the show, she said.