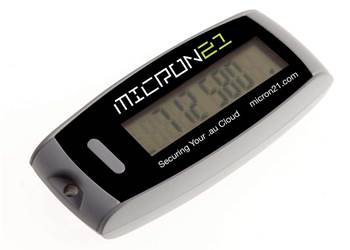 Micron21 has added token authentication to beef up secure access to the management console of its virtual server infrastructure products, settling on a non-RSA system after technical evaluation.

The Melbourne data centre operator started rolling out its own branded tokens last week, after upgrading software behind its virtual infrastructure management interface from VMware vCenter version 4.1 to 5.0.

"So whilst it would stop people brute forcing ... you still were only as weak as if someone knew your password."

As part of its technical evaluation, the company tested five of RSA's tokens. While under test, the RSA hack was exposed - and Micron21 was publicly named as an Australian RSA user with possible exposure.

"It was a bit funny - we basically just asked for a sample kit from RSA," Braunegg said. "We had five keys that we tried."

Rather than anything to do with the hack, RSA's keys didn't meet Micron21's technical requirements.

"The problem is the RSA keys don't do SSL VPN authentication," Braunegg said.

"The difference there is that any user can go to any browser, log into a particular website that downloads a bit of software, sets up a VPN, sets up a secure socket connection, then asks you for the hardware token tag. The RSA solution just isn't there technically."

Braunegg said Micron21's newly launched tokens were so well received that the first batch was already gone and more were arriving this week.

Although the tokens could just have easily operated with vCenter 4.1, Micron21 decided to use the token implementation as an excuse to also upgrade to the latest vCenter product.

"We figured let's roll it into one, say a) we're upgrading but b) we're also dramatically changing the security," Braunegg said.

Micron21 is currently running its 4.1 and 5.0 vCenter systems in parallel. While version 5.0 has new customers that joined over the past month, older customers will likely begin to migrate to the new backend management system this week.

Backend access through the 4.1-based interface will eventually cease.

"We're basically saying no longer are we going to support the old environment. If you want backend access to our infrastructure you need a [security token]."

"It used to lag [in 4.1]. When you tried to access a console of a server it would be really slow and buggy, now it's just seamless. The end user experience has definitely improved."