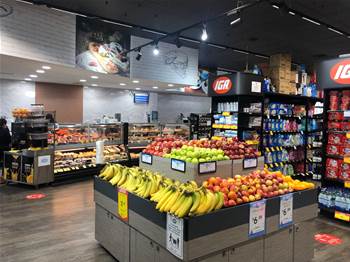 Metcash intends to spend an additional $4 million on digital technology to accelerate online shopping for its food, grocery, hardware and liquor brands.

The parent company to brands such as IGA, Cellarbrations and Mitre 10 is planning to boost its consumer e-commerce experience, with an extra $3 million to be invested in its food division and $1 million spent across its liquor brands.

It outlineds the increased digital investment during its half-year results on Monday.

Group CEO Jeff Adams said Metcash “wants to take advantage of the opportunity we have in getting digital into more of our retailers", and would continue working on the digital uplift in the back half of FY22.

Over the first half of the year, Metcash spent around $2 million across its food brands to accelerate the rollout of its digital e-commerce initiatives for IGA stores with IGA Shop Online, which falls under a strategic program of work called 'MFuture'.

Adams told investors more of its retailers have “engaged with the opportunity in digital”.

“We have started to accelerate the rollout of the IGA Shop Online after a very successful pilot at the end of the last financial year, with the number of stores on the new platform up to slightly over 100 now, from the three trial stores that we started at the beginning of the half," Adams said.

“The interest among retailers continues to build with a pipeline of over 300 stores now signed up. We're targeting 800 stores by 2025.”

Metcash is now planning to roll out IGA Shop Online to South Australia and Queensland, following the platform's initial launch across NSW and Victoria.

Adams said the company's liquor division completed the build of its branded online sites for Cellarbrations and The Bottle-O, “which will replace the current Shop MyLocal platform”.

“The new platforms are now in pilot sites on the east coast with a plan to accelerate the rollout early in 2022, starting with converting over the Shop MyLocal store," Adams said.

“Both food and liquor are making good progress on their loyalty initiatives with the IGA rewards program continuing the rollout to more stores - it's now live in almost 300 stores, and liquor finishing up their design work and looking to move to build and trial in the second half of FY22.”

Adams said Metcash's Total Tools plus the Independent Hardware Group (IHG), which includes brands such as Mitre 10 and Home Timber and Hardware, has made “further enhancements” to e-commerce operations over the half.

“Both are more mature online businesses than where we currently are with food and liquor and … sales results are really starting to make a material contribution to those businesses," Adams said.

Overall Metcash’s online sales reached around $60 million for the first half of FY22, an increase of about 46 percent compared to the same time the prior year.

“It's a multistage program and will run for a number of years. The new single operating system is based on Microsoft Dynamics 365," Bell said.

“Stage one of the program is about consolidating and replacing multiple ERPs so we have a common platform that makes it easier for retailers and suppliers to do business with [us] and simplifies our operating model [for] the digital age.

“Pleasingly, we successfully delivered our first milestone with the core finance module going live in November with minimal issues.

“We plan on settling the stage one scope in the implementation scheduled during the second half and to complete the stage one deployment during calendar year 2023.”

Bell added the Project Horizon’s capital expenditure over the half amounted to $24 million, with expectations another $25 million to $30 million will be spent in the second half.

Stage two of Project Horizon is set to take place beyond 2023 and entails building additional digital capabilities, insights and analytics to drive business development and growth.