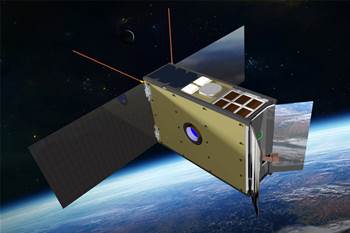 Researchers at the University of Melbourne have received $3.95 million from the Australian government to help develop the nation’s space capability.

Science and engineering researchers at the university will develop a miniature satellite - about the size of a shoebox - due to be launched into space by 2022 in collaboration with local space industry companies and the Italian Space Agency.

Lead investigator of the project, Associate Professor Michele Trenti from the University’s School of Physics, said that despite the Space Industry Responsive Intelligent Thermal (SpIRIT) satellite’s small size, it will be quite powerful.

“It will carry innovative X-ray sensors, sophisticated on-board computers and radios, and even a miniaturised electric propulsion engine, so we could well say that we will be building a tiny robotic spaceship.”

“It will be the first Australian-made spacecraft to host a foreign space agency payload, with an X-ray detector provided by the Italian Space Agency.”

X-ray observations from the craft will be combined with data from a constellation of six other European satellites to spot “cosmic fireworks” produced when stars die or collide with each other.

Dr Airlie Chapman, co-investigator on the project and senior lecturer in mechatronics from the Melbourne School of Engineering, said building the nanosatellite comes with its own unique challenges.

“This project will help us apply engineering research to break new ground in nanosatellite design, manufacturing and operations, hopefully acting as a guide for Australian aerospace research in the future.”

The funding comes from the government’s International Space Investment - Expand Capability grants, with the UNSW also receiving $700,000 and the University of Canberra scoring $430,000 for their own projects.

SpIRIT is a partnership between the University of Melbourne’s Physics and Engineering Schools, Sitael Australia, Inovor Technologies, Neumann Space, and Nova Systems, with support from the Italian and United Kingdom Space Agencies.