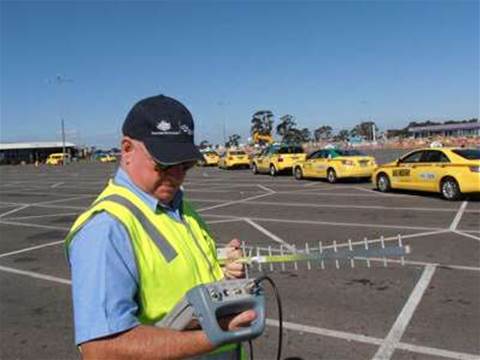 Radio comms could be blocked in fight for passengers.

A Melbourne taxi driver has been fined $850 after pleading guilty to using a GPS jammer.

The conviction appears to be the result of a sting by the ACMA and Victorian Taxi Services Commission that was carried out at Melbourne city and airport taxi ranks in early-to-mid 2013.

The two-stage joint operation saw ACMA inspectors set up a spectrum analyser near taxi ranks and speak to around 300 drivers about the issue of GPS jamming.

Two drivers were reportedly charged with breaking radiocommunications laws. Both were due to face court last month. Other drivers were "reprimanded" or "given their marching orders", according a Herald Sun report.

Allegations of jammer use among Melbourne cabbies were aired back in 2012.

The devices are said to be used by drivers to mask the location of the cab, allowing them to get a job even if they are not in the area.

The ACMA said that jammer usage offences are "not trivial", nor are the potential consequences which include six-figure fines and jail time.

The regulator is concerned that unauthorised jammer usage could disrupt military or civilian radio communications networks.

It will continue to target GPS jammer usage under its compliance regime for 2013-14.