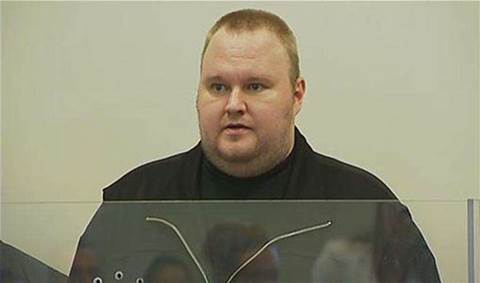 US crime-fighters failed in a bid to keep alleged Internet pirate Kim Dotcom behind bars on Wednesday when a New Zealand court freed him from jail and instead put him under effective house arrest and banned him from using the Internet.

The court, in upholding a bail application by the German founder of file-sharing website Megaupload, cast some doubt on the multi-millionaire's purported flight risk pending an extradition hearing scheduled for August.

"I'm relieved to go home and see my three little kids and my pregnant wife," a smiling Dotcom, 38, said after the ruling, as he was hustled toward a waiting car by supporters and lawyers.

Wearing his usual black T-shirt, trouser and jacket, he vowed to fight the eventual extradition hearing on U.S. charges of copyright piracy, racketeering and money-laundering.

Kim Dotcom, who has New Zealand residency and is also known as Kim Schmitz and Kim Tim Jim Vestor, had been in custody since his arrest in a military-style raid on January 20 on his mansion outside Auckland by local police acting on a US warrant.

Under the bail conditions, Dotcom, who kept a private helicopter as part of his lavish lifestyle, must live in a small house near the mansion he had rented and wear an electronic tag. He will be restricted in how far he can travel. The judge also banned helicopters from flying to or landing on the property.

Prosecutors say Dotcom was the ringleader of a group that netted $US175 million since 2005 by copying and distributing music, movies and other copyrighted content without authorisation through Megaupload.com and related websites, among the world's busiest before they were shut down last month.

Dotcom's lawyers say the company simply offered online storage and that he strenuously denies the US charges.

Dotcom obtained bail on his second attempt, after the judge said a review of the facts and Dotcom's circumstances showed he was less of a risk of fleeing than before.

This month, the High Court had upheld a lower court judge's ruling that there was a major risk Dotcom, who had passports and bank accounts in three names, might try to flee the country.

But Judge Nevin Dawson on Wednesday reasoned that bail could be awarded, given that there was no new evidence that Dotcom had undisclosed funds he could use to aid in a flight from justice.

He said prosecutors had been unable to find any new funds or assets that had not already been seized, and prosecution claims that he was a wealthy man was not sufficient reason to hold him.

Dotcom's three co-accused were also bailed until late August for the hearing of US extradition request.

Judge David McNaughton, who presided in previous hearings, set August 20 as the earliest date he could hear the extradition case, which he has scheduled to last three weeks.

Prosecutors said the formal extradition application has not yet been received but was expected by early March.

Last week, a US grand jury added more charges against Megaupload and its executives, alleging they took copyrighted material from sites such as YouTube for its own service.

Dotcom and his co-accused were arrested after some 70 armed New Zealand police raided his country estate at the request of the US Federal Bureau of Investigation.

Officers cut Dotcom out of a safe room he had barricaded himself in within the sprawling mansion, reputedly New Zealand's most expensive home. Property including more than a dozen luxury vehicles was seized and bank accounts worth millions were frozen.

A small group of Dotcom's friends and supporters listened through both hearings.

"Of course I'm pleased, absolutely. It's about time," a young woman said, but declined to be named.

Dotcom has told the court earlier that with his assets frozen and business shut down, he had no intention of trying to flee to his native Germany, where he would be safe from extradition.

Legal experts have said extradition hearings are likely to be drawn out with appeals likely all the way to the country's highest court.