Meet the CIO of the Year 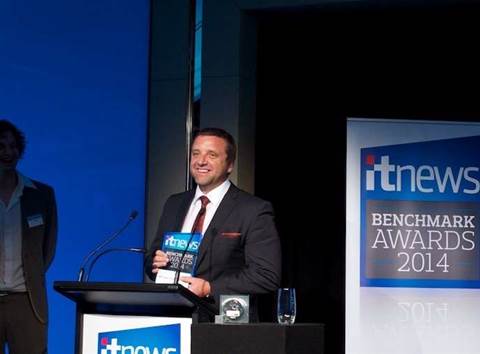 Deakin University’s William Confalonieri took home the top honour at the iTnews Benchmark Awards last night, being named CIO of the Year in front of 250 guests at the Melbourne Grand Hyatt.

The Benchmark Awards are held annually at the CIO Strategy Summit and recognise Australia’s outstanding IT professionals, as judged by the iTnews panel and CIO peers.

In a highly competitive field representing some of Australia's largest organisations, Confalonieri shone out for the vision and ambition behind his forward-thinking overhaul of student services at Deakin University, and the admiration he has inspired in colleagues and peers.

An ambitious back-end integration has produced a seamless user interface allowing Deakin students to manage everything from calendars and timetables to online coffee orders through the cloud-based solution.

Accepting the award, Confalonieri commended Deakin's "strong commitment to being a leader in the digital space".

"This recognition assures us that we are on the right path," he said. "It is a recognition of the quality of leadership within the organisation and the very hard work that my team put into making this possible."

The judging panel received an overwhelming number of commendations for Confalonieri from impressed colleagues, vendors and peers.

“DeakinSync is meeting all of the outcomes and milestones in the project schedule and the feedback is outstanding. I could not be more pleased,” she said.

Representatives of Deakin’s vendor partners described the CIO as displaying “a level of insight, vision and executional understanding that are at the leading edge of his sector”.