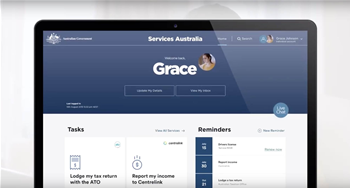 The federal government has tapped upmarket wonk shop McKinsey to develop the business case for the Facebook-like digital services platform that is ultimately expected to replace myGov.

The Digital Transformation Agency handed the strategy consulting firm the $1 million deal last week for what is increasingly becoming a consultancy-led project of national significance.

It comes two months after big four consultancy Deloitte was picked to develop the prototype government digital experience platform (GovDXP) at the cost of just under $1 million.

The proposed platform is the government’s answer to online services for citizens, which according to Services Australia's as-yet unreleased strategy, remain fragmented and difficult to use.

It is expected to give citizens a single, tailored view of their interactions with the government, though the DTA has said the platform will initially operate in parallel to myGov.

McKinsey is expected to complete the business case by mid-July, in time for consideration as part of the government’s delayed budget deliberations later this year.

However, the DTA declined to comment on whether the business case forms part of the first or second stage of the ICT investment approval process.

"The DTA is continuing work to improve digital experiences for Australians, in accordance with Government requirements and relevant procurement processes," a spokesperson said.

A beta solution is then expected to be designed and delivered in partnership with a system integrator.

User research and whole-of-government architecture requirements for the design of the prototype, which is expected to be delivered this month, have already been finalised by the DTA.

The agency has also stepped up its recruitment drive for a range of digital personnel to conduct discovery work on an unnamed “key digital product” in recent weeks.

myGov has faced a wave of skepticism in recent weeks after it crashed in the wake of coronavirus lockdown measures that forced thousands of Australians on to welfare in March.

While much of that was directed at the platform’s performance, government services minister Stuart Robert's incorrect claim of a denial-of-service attack only added to the uncertainty.

Services Australia has since bolstered the portal several times, increasing capacity from 55,000 concurrent users to 300,000 users in a bid to support those seeking welfare services.