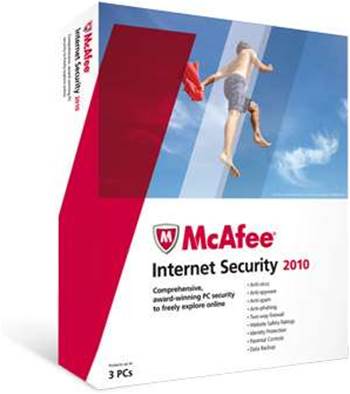 Malware writers are increasingly using the technique to snare unwary users by presenting pop-up windows appearing to be a security report from a recognised firm.

The ads prompt the user to 'scan' their computer for viruses, but in fact often deliver malware designed to steal personal data and credit card information.

"In fact, one company known as Innovative Marketing made an estimated US$180m through these scams in one year, and more than four million consumers purchased their fake security software thinking it was real."

McAfee said that users should also be wary of free screensavers and other applications from non-trusted sources, and that it has seen a fourfold increase in the number of so-called 'scareware' incidents over the past year.

"The Consumer Threat Alerts are a warning to keep consumers from falling victim to online dangers. We are on the front lines watching and protecting against threats, and we pass that knowledge on to consumers."

The firm has posted a video about the scams on its Consumer Threats blog, as well as a range of tricks to spot and ways of limiting the risk of attack.

Got a news tip for our journalists? Share it with us anonymously here.
Copyright ©v3.co.uk
Tags:
mcafeeofplaguescarewaresecuritywarns