MasterCard to roll out 'selfie' authentication 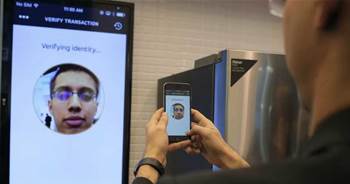 Snap a photo to make a payment.

MasterCard will soon allow its customers to verify themselves through facial recognition when making payments after a successful trial of the technology.

This time last year MasterCard said it had partnered with First Tech Federal Credit Union in the US to test the effectiveness of letting customers verify their transactions through facial and voice recognition as well as fingerprint matching. It later expanded the trial to the Netherlands.

At Mobile World Congress in Barcelona overnight the payments company said it was planning to bring this "selfie pay" feature to 14 countries following positive user feedback.

Through MasterCard's mobile app, users enter their credit card information and hold their device's camera in front of their face to take a picture.

Users will need to blink to prove a photograph is not being held by a camera, and MasterCard said its technology can tell when a video is being played in front of the camera.

The company said it would bring the technology to the UK, US, Canada, Netherlands, Belgium, Spain, Italy, France, Germany, Switzerland, Norway, Sweden, Finland and Denmark this year, according to the BBC. It is unclear when the feature will arrive in Australia. The company has been contacted for comment.

In late 2014 the payments provider teamed up with the Royal Bank of Canada to test whether the beat of a person's heart can be used to verify payments, using wearable technology created by Canadian startup Bionym.

Bionym's "Nymi" wristband authenticates identity by using a person's cardiac rhythm and is designed to eliminate the need for passwords, PIN codes and keys.