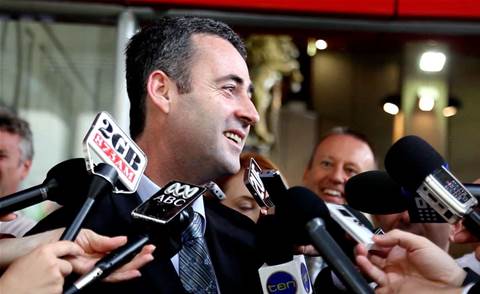 Michael Malone emerged victorious in his Federal Court case against the forces of Hollywood.

IiNet chief executive officer Michael Malone has blasted the film industry for "wasting" two years suing ISPs rather than coming to the table to negotiate a genuine long-term solution to online piracy.

Speaking outside the Federal Court in Sydney, Malone said he was "relieved" that the film industry's appeal had been dismissed.

The copyright case had cost iiNet some $6.5 million to date. The film industry has not put a price on its legal costs, saying only they represented a "substantial investment".

"We've always asserted from the beginning that we weren't responsible for this. We don't believe we authorised or did anything to encourage customers to breach copyright," Malone said.

"All this legal action hasn't stopped one customer from [illegally] downloading anywhere in Australia.

"I'd hope the rights holders would see this isn't getting them where they want to go and that they'll return back to the table and say, 'Let's find a better way'.

"We've wasted two years now and it really hasn't done anything to address the problem."

Malone said that the ISP industry shared a "common view" on the issue of copyright.

He did not believe that copyright could be resolved using purely technological means –for example, digital rights management.

"I don't believe this is a technological problem," Malone said. "It's a society problem."

Malone also believed that the battle over internet piracy would ultimately end up in government hands.

"I think ultimately this is only going to be resolved by the Government stepping in and giving clarity on the situation," he said.

"As is happening around the world, as is happening in the UK and France, that the only way you're going to get clarity on this is if the Government steps in."

An intermediate step may be an escalation of the case to the High Court. The film industry was yet to indicate whether it would go down that path.

Malone said that there was still "nothing to stop rights holders going directly after the people doing the wrong thing".

He said the ISP continued to attempt to negotiate the rights to legitimate content despite the litigation.

"While we were in litigation, we're still simultaneously working with the rights holders to get their material available to customers as well," Malone said.

Malone indicated that the ISP would lift a trading halt it had requested about an hour before judgment.

He said that the appeal had not been as distracting to the iiNet business as the initial trial – in part due to the time allocations.

It was expected that iiNet and the film industry would return to court to "revisit costs" based on details of the judgment, which the parties were still working through.

iiNet was awarded a full account of costs in the original trial.

Australian Federation Against Copyright Theft (AFACT) executive director Neil Gane told reporters that the appeal judgment "obviously wasn't the decision that we were hoping for".

While he took "heart" from certain concessions the film industry had won from the Full Bench of the Federal Court today, he still expressed his disappointment at the outcome.

"This is a case where the ISP admitted to tens of thousands of copyright infringements on its network but doesn't have to lift a finger to prevent them," Gane said.

"It cannot be right that, in effect, the ISP that has the power to prevent copyright infringement online and had admitted [it was] taking place doesn't share the responsibility for stopping it.

"Copyright infringement now goes on unabated on the internet."

Gane said that it was too early to provide comment on the details of the judgment or of the film industry's next steps.

"We will be taking our time now to examine the judgment in detail and to consider all of our options," Gane said.

He acknowledged the support of several organisations, including the Media Entertainment and Arts Alliance (MEAA) and the Australasian Performing Rights Association (APRA).

"We would also like to acknowledge all content creators whose movies, music, pictures and words we all enjoy, and who will be impacted by today's decision," he said.

He said the film industry's spending on the case "was a sign that [it] does take movie piracy very seriously".

"It is a substantial problem," Gane said.

"It doesn't just impact on the movie industry but across the entire economy."