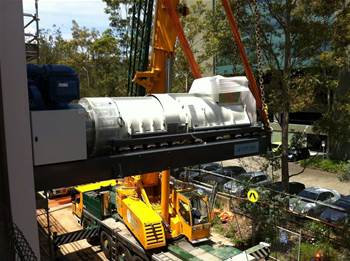 The first of an undisclosed number of the 30-tonne, 2.5 megawatt generators has been deployed at Macquarie's $60 million Intellicentre 2 data centre in Sydney's north-west.

The generators - known as DRUPS - are being favoured in new builds over traditional battery-based UPS.

They still perform the same function - powering the facility in the period between the start of an outage and the back-up diesel generators coming online.

Macquarie's Intellicentre 2 facility is expected to be completed in June of this year.

NextDC has also deployed DRUPS units for its flagship data centre in Melbourne.