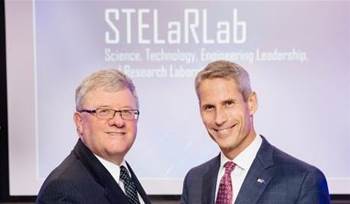 Lockheed Martin is set to expand the number of researchers looking at machine learning and cognitive architectures at its nascent STELaRLab in Melbourne.

STELaRLAB - which stands for science technology engineering leadership and research laboratory - was announced in August 2016 and launched a year later.

It is a collaboration between Lockheed and the University of Melbourne. The defence contractor has put up an initial $13 million in seed funding.

STELaRLAB is the first R&D centre that Lockheed Martin has opened outside of the United States.

The projects it undertakes must have a “business interest to Lockheed Martin, which in turn are problems directly applicable to our national security needs”, the company said.

A few short months after officially opening the lab, the contractor said it has now identified “an immediate need to expand our groups with skills in analytics, machine reasoning and AI applications and infrastructure development".

Machine reasoning is an evolution of machine learning that allows a system to not only learn from what it sees but to reason - much like a human would - when determining an appropriate course of action.

Lockheed intends to bring onboard two new researchers to design and implement “cognitive architecture and supporting analytics and AI algorithms for multiple programs at Lockheed Martin for both internal and collaborative projects with academia and other government research institutions".

It said the results of the research “potentially have far reaching international impact for Australia’s defence and national security”, without elaborating.

STELaRLAB is expected to house about 20 employees within its first three years.