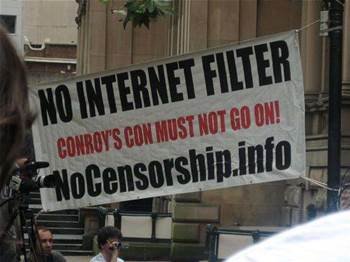 Picnics or protests? Take your pick.

Organisers of the 'Stop the Filter' and 'Block the Filter' national day of action have revealed a mix of protests, information sessions and picnics on Saturday March 6 to protest against the Federal Government's plans for a mandatory ISP-level internet filter.

Protests are being organised by the 'Stop the Filter' group in Brisbane and Perth, which organisers said would be "suited to people who already know about the filter and wish to protest." The group was also arranging a rally in Melbourne on the same day, but this was located at the Victorian State Library and would be "information-focused".

It will be a somewhat more relaxed affair in Sydney, Adelaide and Perth, where the 'Block the Filter' group has organised cyber safety picnics. These were "suited to parents, families and people who are unfamiliar with the filter."

The day of action comes just weeks after Anonymous scheduled a day of nationwide protests at the Government's plan, attendance at which was far lower than expected.

Western Australian Greens Senator Scott Ludlam said over the weekend that his party would seek to block the legislation when it was introduced sometime in "Autumn 2010" - the last guidance from the Government on its timing.