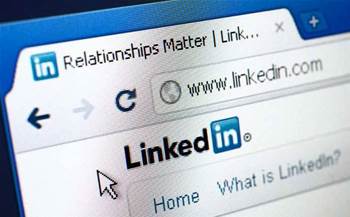 Australia's intelligence chiefs might be a little coy over the exact tactics used by hostile intelligence services to snare sources on professional networking sites like LinkedIn, but it's a different story in Lithuania where social tradecraft has is now on full public display.

Intelligence services Lithuania have provided key details on how individuals in the Baltic nation are targeted by Chinese spies on the Microsoft-owned professional networking site LinkedIn, to recruit sources in government departments and key industry sectors.

In its 2020 National Security Threat Assessment [pdf], the Lithuanian Ministry of Defence and the State Security Department intelligence agency (VSD) noted that thousands of LinkedIn users in the country and elsewhere in the world have received offers from fictitious Chinese companies to become consultants or to take up employment with them.

The companies are a cover for Chinese intelligence, which is exploiting LinkedIn's dominant position as a recruitment site.

VSD said the Chinese use LinkedIn's messaging platform, with requests for consultancy services from targets.

Targets are asked to provide analytical assessment of trends in specific countries, and summaries of public and non-public political and military information, VSD said.

The LinkedIn accounts have Western first names and Chinese surnames, and fake photos that are sometimes generated with artificial intelligence.

Use of poor English characterise the accounts, and the Chinese companies usually have no history or don't exist, with the description of their activity being abstract and often meaningless, VSD said.

To lure Lithuanians into working for them, the Chinese spies offer payment in advance for consultancy services and employment with confidentiality required.

Targets are also offered trips to China with all expenses covered.

Their goal is to get the target to agree to the next meeting being held in China, and will follow up through communications channels outside LinkedIn such as email, and mobile apps like WeChat.

"The ultimate goal of the Chinese intelligence is to recruit targets in China.

Such operations are extremely cheap and pose no risk to Chinese intelligence officers," VSD wrote.

The Lithuanians' threat assessment comes after the Australian Security Intelligence Organisations (ASIO) in October last year warned business and government about how LinkedIn is being used by hostile intelligence agencies as a cultivation tool.

ASIO asked that people and companies operating in sensitive sectors should be far more judicious about what they reveal on LinkedIn and other social media, as providing too much information would help fulfil a wide range of intelligence objectives from hostile agencies.

Being exposed to hostile intelligence agencies has not prevented ASIO or Lithuanian government departments from using LinkedIn for recruitment.