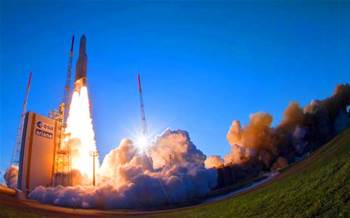 NBN has successfully launched the first of its two Sky Muster satellites in French Guiana this morning, although end-users will still have to wait until next year before they can receive services.

NBN’s second Sky Muster satellite is expected to be launched during the second half of next year. Each device weighs around 6400 kilograms.

While the first satellite was successfully launched into space this morning, NBN satellite program director Matt Dawson told iTnews it will still take another 10 days to get the satellite into position over Australia.

“The rocket launch will put the satellite into a transit orbit, and then we will need to circulate it to a longitude of 140-east, over Australia, and raise it to a geostationary orbit around 36,000 kilometres off the earth,” Dawson said.

Once the satellite is in position, there will be a several-month long setup period, followed by technical and functional tests of the equipment.

“After the launch, there will be a period of two months, or until around early December, where our launch partners SSL will perform tests on the payload to make sure everything is working correctly,” Dawson said.

“Once those tests have been performed, SSL will hand over control to Optus – because we’ve outsourced tracking, telemetry and control services to Optus. They will integrate the satellite with the 10 ground stations and commission the 101 spot-beams.”

A spot-beam is a focused satellite signal that covers a specific geographic area, with 101 to be used by the NBN to cover the entirety of Australia.

“So at this stage, RSPs will begin offering LSS satellite services in late April or early May 2016.”

NBN closed orders for its interim satellite service in January 2014 after it reached its 48,000 user capacity.

It this year ordered all retail service providers on the interim satellite service to enforce a 50GB four-week usage threshold for customers to combat ongoing congestion.

The Department of Communications’ regional telecommunications review earlier this year heard many rural residents are spending thousands of dollars on aerials and repeaters - while similarly paying large amounts of money for internet plans with small usage allowances - just to get online.

According to Dawson, NBN will more carefully manage the long-term satellite service as a result of the interim satellite experience.

“Unlike terrestrial networks, which allow you to respond to demand by adding capacity, satellites have finite capacity and, once you’ve launched, you can’t add more,” he said.

“So what NBN has learnt from the interim satellite service is we need to have robust measures in place to manage capacity on the service.

“So the key thing is to have fair-use rules in place to manage that capacity.”

NBN this week revealed it would use deep packet inspection to enforce its fair-use policy and combat the potential for leechers sucking up high amounts of bandwidth, as first reported by iTnews.

While the technology has the potential to also be used as an anti-piracy tool, Dawson defended NBN's use of DPI.

“What we have done is put out a request for information to solicit what deep packet inspection capabilities have, to optimise our network capacity,” he said.

“So it has nothing to do with managing piracy. We need to manage finite capacity as efficiently as possible and optimise capacity on the network. Deep packet inspection is part of that.”

Another area of concern with the service has been around latency. Dawson said the NBN has taken steps to minimise the speed issue.

“As a fact of physics, a satellite that’s 36,000 kilometres away is going to have higher latency than a fixed wireless tower 2km away,” he said.

“But we have put in place performance enhancing proxies and other technology so users will still be able to use it for voice calls, videos and Skype.

“So it will only be a consideration for a small number of people who will want to use the service for real-time gaming. But the real-life experience from satellite users in North America has been that it’s not as big an issue as some have made out.”