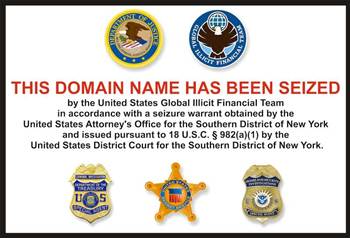 US federal law enforcement have shut down Liberty Reserve, a Costa Rica-based online business that allowed users to anonymously move money and convert digital currency and arrested its founder Arthur Budovsky in Spain.

The impact of the crack down will be devastating on the carding and fraud underground scenes which favoured the service to transfer money.

The Liberty Reserve website has been taken down and replaced with a seizure notice.

Between 2006 and this month, Liberty Reserve processed around 55 million financial transactions, according to an indictment unsealed Tuesday in US. District Court in New York.

Liberty Reserve laundered more than $6 billion in criminal proceeds, according to the indictment, which named Budovsky and six others as defendants.

It had more than a million users and allegedly facilitated a range of illegal activity like computer hacking, credit card fraud, drug trafficking, investment fraud, child pornography and identity theft, the indictment said.

“It's been around for a long time and it's become a bit of a mainstay of the underground economy.”

In the short term, criminals would turn to smaller competitors that provide similar services, he predicted.

Carding forums have erupted in anger and frustration about the closure, with some complaining that their funds will not be released.

Others have flagged alternative payment services which they say will fill the gap left by the closure.

Many carding sites required a payment through Liberty Reserve or alternative payment service Western Union in order to join.

Budovsky incorporated Liberty Reserve in 2006, after one of the first digital currency exchanges Gold Age failed.

Prosecutors said he renounced his US citizenship and became a Costa Rican citizen in 2011 so that Liberty Reserve could remain undetected by law enforcement here – a feat he failed to accomplish with Gold Age.

After Gold Age's demise, Liberty Reserve grew to become the “bank of choice for the criminal underground,” the indictment said, since users could essentially open accounts and transfer money anonymously.

But it was also used for legitimate money transfers due to its lower fees.

When registering for Liberty Reserve, account holders only needed to input basic information such as their names, dates of birth and email addresses, and none of the data was verified.

Users could also hide their account numbers when transferring funds, and the site's operators required all deposits and withdrawals to be made through third-parties to prevent Liberty Reserve from having to collect user information that could be tracked by police, the indictment said.

Along with Budovsky, six other individuals were charged in connection with Liberty Reserve's operations: Vladimir Kats, Liberty Reserve's co-founder; Ahmed Abdelghani and Allan Jimenez, who at various times managed its day-to-day operations; and Azzeddine El Amine, who oversaw various financial accounts operated by the company. Mark Marmilev and Maxim Chukharev were indicted and described as “associates” of ringleader Budovsky, who designed and maintained Liberty Reserve's IT infrastructure.

Idan Aharoni, head of cyber intelligence at RSA, wrote Tuesday in a blog post that the impact of Liberty Reserve's sudden disappearance is “severe,” but that fraudsters will turn to other resources as they have done in the past.

In addition to migrating to other e-currency services, Aharoni said digital crooks could adopt Bitcoin, an open-source digital currency that has exploded in popularity.

Got a news tip for our journalists? Share it with us anonymously here.
Copyright © SC Magazine, US edition
Tags:
arrestcardingcrimefbiliberty reservesecurityus governmentwestern union