Lexmark inkjets get the iPhone makeover 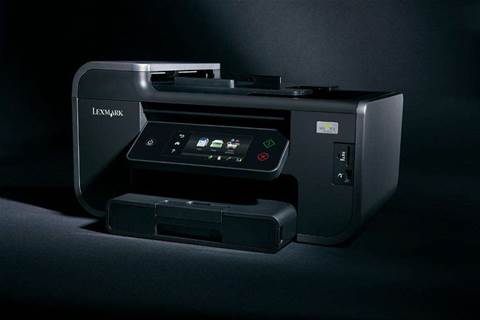 The top three devices sport a 4.3-inch touchscreen which can download applications from an online application store run by the vendor.

There are 14 applications in the online store, with more awaiting approval. Lexmark has not released the software development kit for its inkjet range, though it has for the enterprise (laser) range.

The applications for Lexmark's inkjet MFDs are not compatible with its enterprise range.

The applications appear as colourful buttons on the black touchscreen, which looks very similar to the iPhone's interface. The touchscreen MFDs start at $399 including GST and top out at $599.

Other features include wireless 802.11g on the more basic MFDs and 802.11n and Ethernet on the upper range. All but the two entry-level models print double-sided, although scanning is only single-sided.

All the products are built on the same platform and use the one series of cartridges. The larger printers can use a 510-page black cartridge which sells for $7.95 and drops the per page cost to one cent.

Stephen Bell, channel and SMB manager for Lexmark, said he had been talking to reseller partners about the range this month and had received very positive feedback.

The printers are backed by an on-site exchange warranty, covered in the first 12 months by the retailer and for three years by the channel.