Letter tied to Hurd's HP ouster to be unsealed 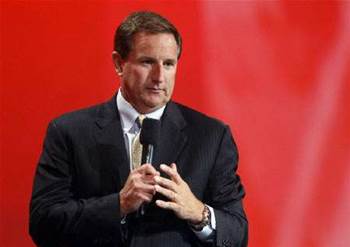 A letter that had prompted Mark Hurd's abrupt resignation as chief of HP was ordered unsealed by a Delaware judge, potentially revealing more details of his dramatic exit last year.

The letter was sent to Hurd from a lawyer for an independent contractor who had accused him of sexual harassment.

It prompted the world's top computer maker to investigate Hurd, who has since joined Oracle as president.

While HP cleared Hurd of violating the company's sexual harassment policy, it accused him of falsifying expense reports to conceal a close personal relationship with Jodie Fisher, the contractor.

Delaware Chancery Judge Donald Parsons wrote in an opinion issued late Thursday that much of the information was already public and he determined the contents of the letter were not protected.

"We are disappointed with the court's ruling and will appeal the matter," said Hurd's lawyer, Amy Wintersheimer. "We believe the letter, which was clearly marked 'confidential,' should remain that way."

The appeal will likely keep the letter from the public.

The 71-page opinion disclosed some of the letter's details, noting that Hurd was accused of using corporate funds to "wine and dine" Fisher and leaked to her "potentially material" nonpublic information about the company.

"While some of the allegations in the letter concerning Hurd's conduct vis-a-vis Fisher are candid, they are not graphic or lurid," wrote Parsons. "Unsealing the letter would not publicly reveal entirely new information about Hurd; instead, it simply would provide more details concerning a matter of established public knowledge."

Parsons did write that the letter contains some "intimate details" about Hurd's private life and his relationship with his family, which the judge said he had legitimate interest in keeping private.

Hurd and Fisher have said the letter contains "many inaccuracies."

The dispute over the letter stems from a lawsuit by a shareholder, Ernesto Espinoza, who is seeking HP's records relating to Hurd's resignation and severance package. The company agreed the letter was not confidential, but Hurd intervened in the case to fight to keep it from the public.

Fisher has said the letter contained "many inaccuracies."

Espinoza's lawyers did not return a call for comment.