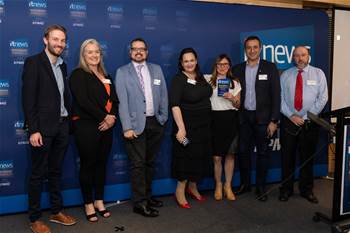 Lendlease has taken out the Innovation Group Award in the 2022 iTnews Benchmark Awards, for its efforts to modernise the construction industry.

The 60-plus year old company’s platform, Lendlease Podium, aims to modernise the design, construction and operation of buildings.

It is designed to speed up creation of multiple building designs to improve performance, sustainability, occupant experiences and other outcomes.

To achieve this, Lendlease has been connecting previously siloed data across the property value chain. The goal is to connect development, construction and operation data, Jasna Sims, Lendlease Digital's head of market development, told iTnews earlier this year

“That's something that's really fundamentally different about Podium, because up until now, most technologies that have tried to improve our industry have tried to do so in part one part of the value chain,” Sims commented.

In a pilot during the building of a multi-story apartment building, Lendlease Digital claims its platform reduced schedules by 45 days and resulted in $2 million of construction cost savings.

Over the last few years, Lendlease Digital has also brought digital thinking, skills and capabilities to the company.

The business unit combined its IT, innovation and digital project teams into one business. IT has also hired people from the automotive sector and other industries that have made greater progress digitising the way they work.

Lendlease Digital has also adopted modern technology development practises and used early adopter groups within Lendlease to pilot Podium and advocate its use within the company.

You can read and watch more about Lendlease’s work alongside the other winning projects and finalists here.