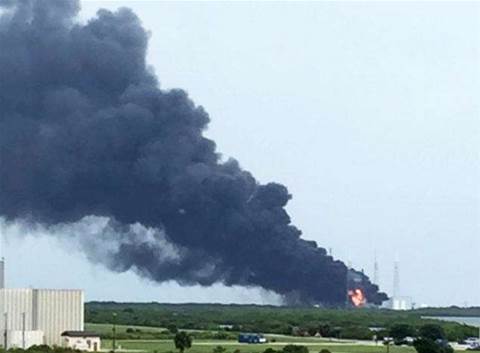 An explosion destroyed a Falcon 9 rocket belonging to Elon Musk's SpaceX and its satellite cargo during routine test firing at Cape Canaveral in Florida on Thursday, two days before it had been due to blast off and place the satellite in orbit.

SpaceX said there were no injuries and that an "anomaly" during the static fire test resulted in the loss of the rocket and the communications satellite owned by Israel-based Space Communication, which was going to be used by Facebook.

The large blast shook the launch pad leased by SpaceX at Cape Canaveral Air Force Station in Florida just after 11 pm AEST, sending a thick plume of black smoke pouring into the air.

Musk said the loss of the rocket had occurred while it was being filled with propellant.

It was not immediately known to what extent SpaceX's launch pad was damaged or what the impact would be on the dozens of NASA and commercial satellite missions on its launch schedule.

People in buildings far from the facility felt the shock waves, but local authorities said residents were not at risk.

The Federal Aviation Administration, which oversees commercial rocket launches in the United States, will work with SpaceX to understand the cause of the accident, agency spokesman Hank Price said.

SpaceX had been due to launch its 29th Falcon 9 rocket before dawn on Saturday, carrying the AMOS-6 satellite owned by Israel's Space Communication.

Facebook would have been among the customers for bandwidth on that satellite. Last year, Facebook said it was partnering with Eutelsat Communications to boost data connectivity to large parts of Sub-Saharan Africa.

In a post from Africa, Facebook founder Mark Zuckerberg said he was deeply disappointed at the loss of the satellite which he said would have provided connectivity to many entrepreneurs and everyone else across the continent.

"We remain committed to our mission of connecting everyone, and we will keep working until everyone has the opportunities this satellite would have provided," he wrote.

SpaceX had planned to dispatch as many as nine more missions before the end of the year, including two flights to place a 20-member satellite network into orbit for Iridium.

SpaceX, one of two companies that fly cargo to the International Space Station for NASA, was next scheduled to take off in November for the orbiting laboratory, which flies 400 km above Earth.

"NASA still is assessing what impacts, if any, the incident will have on future missions," spokesman Michael Curie said in an email.

SpaceX says it has a backlog of more than US$10 billion worth of launch orders from customers including NASA and commercial companies. This week it said it had signed its first customer to use a previously flown Falcon 9 rocket, but that launch was not due until later this year. The rocket that blew up on Thursday had never been flown before.

The company was founded by Musk in 2002 and began launching its Falcon 9 rockets in June 2010, racking up 27 successful flights and one failure in a little more than six years.

Musk set up SpaceX with the goal of slashing launch costs to make travel to Mars affordable. The company plans to fly its first unmanned spacecraft to Mars in 2018 and to send humans to the red planet as early as 2024.

Musk is expected to unveil details of his Mars program at the International Astronautical Congress in Guadalajara, Mexico, next month.