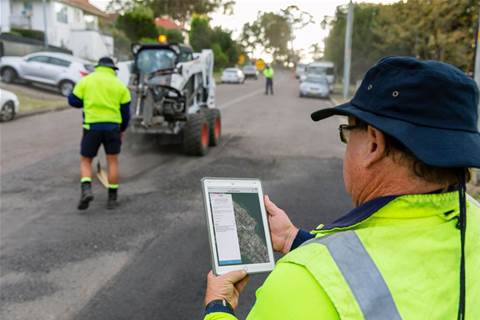 Lake Macquarie City Council has built a custom iPad app to allow its road crews to better capture and manage the condition of its $1.7 billion of local road infrastructure.

The app allows council to improve the efficiency of road maintenance and upgrade works by letting field crews inspect, photograph and - if needed - assign repair work from the site of a defect.

“Once the job is assigned to a crew, it is prioritised by severity and location, ensuring that the crews complete the jobs in an efficient sequence," council's asset management manager Helen Plummer said in a statement.

Business transformation lead Caitlin Botha told iTnews that the project started in January this year, with council adopting an agile approach to development.

“Within four weeks we had a pilot underway, let [a trial crew] test it for a month and then we rolled it out to the rest of our crews after that,” Botha said.

Botha said that streets on the app are colour-coded so crews are able to understand what work is planned in the next 12 months and can tailor their remediation efforts to suit.

“If we’re going to go and do a major reconstruct in two months, we don’t want to spend a lot of money on [a defect],” Botha said.

“[The crew] might just make it safe, and then in two months time they know it’ll get repaired in full.”

The response from staff had been positive, giving management and field workers “an appetite to extend this type of technology into lots of areas”, Botha said.

Botha said field staff in particular were calling for it to be extended to other maintenance activities such as footpath and drainage works, roadside mowing jobs and the management of illegal dumping.

The city is also exploring other smart city projects, supported by the federal government’s Smart Cities and Suburbs Program.

It is currently looking to deploy a network of sensors across key civic spaces to collect real-time environmental and user data.

It is hoped the use of open data will enable both council and local businesses to better deliver services to the community.