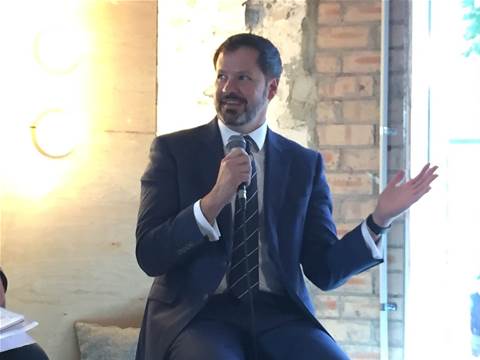 Billions of tech dollars spent by major banks and their emerging competitors on new open banking capabilities could in days be left in limbo by an incoming Shorten government.

Labor’s Digital Economy shadow Ed Husic has told iTnews outstanding enabling legislation for the new Consumer Data Right will play second fiddle to other legislative imperatives, like reforming negative gearing and dividend imputation, in the event of an election win.

“Will it be an immediate or priority? I wouldn't necessarily say that would be the case, given what we have flagged as big priorities for us from negative gearing franking reform and the like,” Husic said.

At the moment open banking enabling legislation contained in new Consumer Data Right laws remain stranded in the Senate log jam that coincided with the Morrison government going to the polls.

While Big Four bank CIO’s like former Westpac tech chief Dave Curran had talked-up the impact of open banking, other institutions like ANZ have been publicly less keen to buy into the reforms that are based on exposing customer data through APIs and brokers.

But it’s certainly not all bad news for the beleaguered banking sector.

While Labor’s position will leave dozens of major bank technology projects up in the air, most institutions will, quietly, likely be happy for any breathing room given the size of new remediation provisions – like customer refunds for fees-for-no-service – that have landed in half yearly results.

CBA’s latest remediation, revealed in its latest earnings update, is more than $700 million on its own. CBA’s competitors, now in the throes of major tech and ops ‘transformations’, will also be to most happy to trouser any surplus project cash left over from an open banking pause.

So far, Labor’s position on open banking and the consumer data right, at least as Husic articulates it, boils down to roughly three things.

Firstly, it shouldn’t be so rushed.

Secondly, it needs to tangibly benefit less wealthy bank customers as well as sought-after affluent ones.

Lastly, there needs to be a much bigger discussion about how data can be harnessed for social and public good rather than just used to drive competition between already clearly profitable institutions.

That seems to be the plan anyway.

One of Husic’s biggest grumbles with open banking appears to be that it was cherry picked as a front runner that focused on capital and wealth industries when other community benefit projects could have led.

“We've done a lot of work in terms of talking with people and better understanding where things should head. I think there are some good things in there,” Husic offers.

“But my big, nagging concern is I just don't want this to be a reform, that reinforces benefits for high net worth individuals.

“I still have not seen a cogent case made that the very people that were supposed to be benefiting from this, mum-and-dad consumers, would get the benefit.”

Under the Coalition’s model, consumers would be able to contest banking and transactional services by exposing their data and, effectively, letting rivals bid for their business.

Husic, who comes from Sydney’s west, is primarily concerned that while such an approach will work for affluent and thus more profitable customers, it will leave less wealthy, lower margin people stranded with higher fees because few institutions want their business.

It’s a nice sentiment, but the reality is the customers banks really love are the ones that are prepared to pay monthly interest on their credit cards after a binge in Bali or taking out a bank loan to buy a hot new car.

At the same time, much of the granular and analytics focus on mortgage applicants’ regular spending by banks was enabled by Labor’s implementation of positive credit reporting that weighs bills paid (positives) against unpaids (negatives).

The rub is consumer spending data gets sold in the process, but hey, that’s transparency for you.

Big bank CFOs will shed few tears if Open Banking is parked, even if their CIOs could find their budgets swiftly repurposed. Neobanks and the Fintech sector, however, are likely to scream blue murder.

Husic makes it plain he’s willing to listen and engage, but ultimately can’t please everyone.

There aren’t many specifics, but the clear theme from Labor is the application of reform to achieve wider social equity. In big picture terms, this translates to enterprises that create more permanent and stable jobs over cash-burning, fast growth start-ups.

Think the kind of stable, permanent jobs banks prefer to see when writing a mortgage rather than people owning their own businesses or working for start-ups on lower salary-for-scrip deals, let alone the gig economy.

“We are very interested,” Husic said of Labor and the Consumer Data Right, before issuing a qualification.

“I would rather bake-in early into the reform process a recognition that this needs to be broader than just being able to give better financial advice to people who can pay for it, and it will genuinely and broadly deliver a wider benefit,” he said.

But there are plenty of positives Labor would keep with open banking. Some of them may not yet be apparent.

“When this thing was released, no one knew what the end uses would ultimately be. So I understand that you have got to keep an open mind,” Husic said.