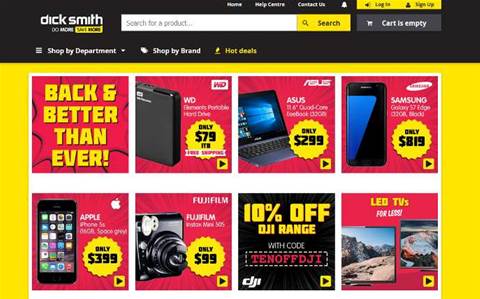 The electronics retail site will offer a range of over 5500 products, including smartphones, tablets, cameras and home appliances, Kogan said.

The new brand is expected to add around $95 million a year in sales to Kogan's overall business. It has no plans to reopen physical stores.

“Dick Smith’s recent history has been disappointing for many Australians, but for millions of us, it is an iconic brand we all know and love. We will work hard to restore the faith Australians have put in the Dick Smith brand for almost 50 years,” Kogan executive director David Shafer said in a statement.

Following the collapse, the Dick Smith brand name and customer database were put up for sale by Ferrier Hodgson. The intellectual property assets were snapped up by Kogan in mid-March, who announced his intention to run the Dick Smith brand alongside its kogan.com operation as an online-only business, with a relaunch date originally slated for June 1.

Dick Smith, first launched with a single Sydney store in 1968, had previously been purchased by Woolworths in 1982, and later by Anchorage Capital Partners in 2012, before being floated for $520 million in November 2013.

Immediately prior to its collapse, Dick Smith had 393 stores in Australia and New Zealand and 3300 employees on both sides of the Tasman.