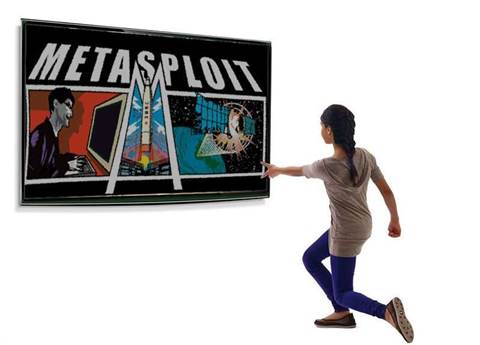 Merges gaming with the art of exploitation.

While Hollywood often fails to accurately portray hacking, one researcher has made the art of exploitation look more like the big screen.

Security researcher and creator of p0wnlabs, Jeff Bryner, showcased the Kinectasploit game at Defcon 20. The game is a product of the improbable melding of Microsoft's Kinect gaming motion-sensor with hacking tools such as Metasploit.

Players are represented as an avatar within a series of three-dimensional rooms, each one housing different hacking tools which materialise from the walls in an event inspired from a scene in The Matrix.

Kinectasploit hackers choose from a cyber arsenal of 20 tools that includes Snort, Nessus, John the Ripper and Ettercap.

They navigate the game by using full body motion; leaning will move the character in a corresponding direction, pivoting at the hip turns the character, and a series of arm gestures can execute commands.

In a demonstration, Bryner hacked into a target and retrieved and forensically analysed a file from Windows machine recycle bin folders.

He began by scanning for targets and cracking a WEP key by shooting a "fireball" at an access point to select it, and then dumping packets - illustrated by balls of packets being sucked towards the player.

He then showcased the Nessus room which was depicted as a hospital where the victim machine appeared on an operating table for scanning.

The vulnerability text was splashed on the walls of the room from where an open share was targeted. An in-game intercom which guided players throughout the game declared that a pcap file was discovered. This was sent to Ettercap, depicted as a whirling "death machine".

Credentials could be packaged as a kind of suitcase that could be carried into other rooms hosting nmap, John the Ripper, Metasploit and forensics.

To pass time during lengthy scans and analyses, players could walk into a Twitter room and read three-dimensional streams of social networking chatter.

Bryner told SC he was continuing to develop Kinectasploit and most recently was working to integrate a LEAP motion and MYO as alternative motion-sensor device options to the Kinect.

The program and its prerequisites are available for download on github.