Kennards Hire sets up IoT as a "core strategic priority" 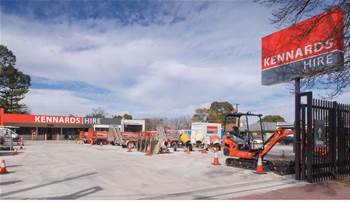 Leads to on-demand services, could be used for unmanned depots.

The vehicle and plant rental company earlier this year revealed an “IoT-led digital overhaul”, using connectivity from Fleet Space Technologies and a stack of Azure services from Microsoft.

One of the main outputs so far is a system called ‘EasyTRAK’, which takes data from sensors on hire assets and aggregates it in Azure for further analysis.

But the company has also identified a number of other use cases for IoT beyond asset tracking and associated applications, so much so that it converted IoT from IT-led project to business-led core priority in FY19.

“IoT moved pretty quickly from a project for us to explore a bit more about what capability was out there that we could use to improve our own business to [something we could use to] improve our customers' businesses as well,” strategic projects general manager Craig Kesby said.

“That resulted in a lot more focus, support and resources to move things along in the right direction, because we could see there was a potential to have a broader impact than just our own business.”

Just how big an impact IoT might have on the Kennards business is still an open question, and will depend - to some extent - on just now many of its 120,000 assets are fitted with IoT sensors.

IT infrastructure manager Mitch Hirsch said that Kennards’ initial vision was to “chip everything up” - that is, connect all 120,000 assets - though Hirsch now admits that “probably wouldn't make economical sense today.”

He hasn’t abandoned the idea entirely. “Ultimately, it would be good to have every single piece of equipment from our 15 ton excavators to our angle grinders and barricades connected in some way,” said Hirsch.

But for now, Kennards is being more targeted in its application of IoT.

“We are starting at the ‘larger end of town’, because the data that you can capture from an excavator is a lot more interesting and richer than what you can get from, say, a demolition saw, and then it's just a case of trying to work out what we can do with that data,” Hirsch said.

“It's really about identifying a problem first, working out what data is needed to solve that problem, and then the final step is then working out what device, what backhaul and what carriage [service] is required to get that data to the platform.”

Kennards Hire’s IoT experiments began as a way to develop a more affordable solution to power “GPS track and trace” for rental equipment.

Hirsch said that the company had been sourcing GPS gear from “distributed vendors” but had wanted a “much more economical” solution.

He started experimenting with “Raspberry Pi's and Feather M0's in the back of the office”, and processed the data in those early experiments using AWS services.

Those early proof-of-concepts proved powerful: “When you extrapolated the value to the size of fleet we have across the business, there was some pretty significant savings on paper that could be made if the project was to scale,” Hirsch said.

As the business saw the potential value from IoT - and made IoT a core strategic priority - the next step was to scale up the experimental systems to production.

It embarked on this piece of work in conjunction with Microsoft and Telstra subsidiary Kloud.

Technology-wise, the production system bears little resemblance to the componentry used in the initial experiments.

“Everything we did in the initial days … has been torn down and rebuilt from July 1, effectively the start of FY19,” Hirsch said.

The company pulled the pin on custom hardware development and instead decided it wanted to be able to take data from as many different types of sensors as possible.

“We decided very early on that we weren't going to sit there and reinvent the wheel of hardware,” Hirsch said.

“We initially looked at designing our own PCB and getting it manufactured in China, but with the sheer number of devices out on the market that were just quality, 10 revisions down the track, with a proven track record, and IP67 rated - it just didn't make sense.

“So we wanted to shift our investment into the platform - the analytics and the interface - and become agnostic at the point of ingesting that data.”

So far, Kennards is able take data from sensors created by “more than 20 device vendors”.

“That's our whole mantra - we don't care where we get the data from, as long as we can get it, we can make an API for it and we can pull that data in,” Hirsch said.

“We just need to ensure that the device is going to be fit for purpose around our use case, and that's the main reason why we've integrated with so many, because there's no one vendor we've found that would have a device that would tick all the boxes for all of our use cases across our 120,000 assets.

“They're all from different manufacturers and we definitely wanted to go the best-of-breed device for each of our use cases in that respect.”

It isn’t clear just how many of the 120,000 assets now have a sensing capability.

About 2000 were fitted with the company’s traditional choice of GPS tracking, which was mainly used for theft prevention though Hirsch notes this has become “a smaller and smaller component of the value we see in this telemetry data.”

The GPS trackers are, for the most part, still active. “We have kept some of those devices in so it hasn't been a case of having to rip them out, we've just been able to use an API to pull the data in from the assets that had that existing device installed,” Hirsch said.

New assets that Kennards Hire bought often came with in-built sensing or are being retrofitted with a “third party device”.

“A lot of manufacturers are having telemetry built into their equipment from the factory,” Hirsch said.

“So we’re establishing partnerships and relationships and commercial arrangements with some of these bigger equipment vendors such as JLG and Skyjack to pull data in directly from their platforms.”

Assuming it can make the economics work, Kennards Hire sees future use cases for sensing smaller pieces of rental equipment, including the possibility of running “unmanned” hire depots.

“I think the telemetry we capture from smaller assets we have, such as small hand tools, is mainly going to be around location and utilisation, and then that flows into things like unmanned facilities,” Hirsch said.

“If all of our small tools had Bluetooth tags on them, does that set up the technology to allow an unmanned facility to exist where a customer could come up with Bluetooth phone, scan in, and take the equipment out.

“We would know what had been removed based on the Bluetooth tags, along with when it was returned, and how long it was used outside of that unmanned facility as well.”

Using sensors on heavy earthmoving equipment such as excavators, Kennards Hire is able to better keep track of the location of equipment as well as whether it is being used as agreed.

“For example, if a customer stands down an excavator because they say it's raining, we can actually remotely immobilize that excavator,” Hirsch said.

“If the customer then tries to use it while they’re not paying for it, they'll have to ring up for a code or we can retrospectively look on the system and see when the equipment was being used.”

“If an excavator is out on a long term hire, say for six months, we would traditionally not have visibility of that excavator,” Hirsch said.

“If it was approaching a service based on the hours used, the service would generally get missed.

“Now we have the visibility to say, ‘this excavator's out on site, it's about to hit its 500-hour service [window], we should probably ring the customer and organize a remote service technician to go out there and perform the 500-hour service, instead of potentially surpassing that and having it break down on site.”

Another use case for IoT is on the company’s fleet of 1200 hire vehicles, such as utes, tabletop trucks and vans.

Hirsch said that until recently, Kennards Hire did not have a way to pass on toll charges incurred by the hirers of these vehicles.

“Through this technology, we can geofence all the toll gates across Australia and New Zealand, and in real time, when a vehicle passes through a toll, we can pass that charge on directly to the hire contract and look to pass on 100 percent of those toll charges for some savings there,” Hirsch said.

Kesby said that the IoT push had also resulted in new revenue opportunities for Kennards, particularly around “fluid management” - such as fuel, water and waste - on construction and industrial sites.

Usually, assets like hire toilets would be replenished on a “time scheduled” basis.

However, by closely monitoring usage with remote sensing, both Kennards and the hirer can move to a more “dynamic, on-demand” replenishment and servicing model, Kesby said.

Sensors had also been used to alert the hirer and Kennards to any problems.

“We've already had a few examples of this with customers … where the system was able to detect a change in usage profile and alarm something,” Kesby said.

“We averted a flood of waste on one site because the system detected that the tanks were filling too fast and alarmed that.

“We got some people out there and got it fixed up quite quickly, and the project director's response to that was previously that would have just resulted in a shutdown on the site.

“They wouldn't have seen it until it started overflowing and they'd have then had to shut down and get that cleaned up and done.”

Kesby said that customers trialling sensor-enabled assets had asked Kennards to take on more replenishment and removal services on an on-demand basis, which had led to new services being created and sold.

“Suddenly we went from just providing the gear, to now providing the gear and the attached services that go with that over the length of the project, which is a strain of revenue we weren't aware of,” Kesby said.

“We're a closer partner through the life of the project with our customers which is good. It gives us more opportunities to see what's going on and to try more things.”