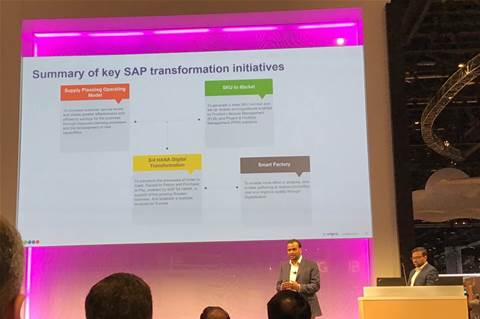 One of four digital transformation initiatives driven by parent company.

Cereal and snack food giant Kellogg’s is scoping the business case to upgrade SAP in all its worldwide regions to S/4 HANA after embarking on a three-year upgrade project targeting its European operations.

Senior IT director and global SAP platform owner Ramesh Kollepara told SAP’s SAPPHIRE 2019 conference in Florida that the S/4 HANA upgrade is one of four key programs of work that the champion of breakfasts is pursuing under a digital transformation agenda.

Upgrading its SAP environment to S/4 HANA is considered the biggest package of work.

The project is running under the codename Kuantum in Europe, where Kellogg’s is working with Wipro and EY to power what is anticipated to be a three-year upgrade effort.

The reasons to move to S/4 in Europe are applicable in other geographies where Kellogg’s maintains a presence.

This includes the region Kellogg’s internally calls KMEA - Kellogg’s Middle East and Asia - which iTnews understands is the umbrella the company’s Australian operations now come under. Australia remains a significant market for Kellogg’s, the company said.

“Along with Europe, all other regions are actively looking into S/4 HANA transformation,” Kollepara said.

Kollepara said that putting together business cases for regions other than Europe to upgrade to S/4 HANA is likely to be a “three-to-four month activity”.

He said Asia Pacific had some challenges in that not all of the countries within it currently ran on an SAP backbone.

Kollepara cited India as an example, but said the company is still looking at its options.

It’s unlikely to be a deal-breaker; the European S/4 upgrade similarly includes bringing Russia onto the European SAP environment for the first time.

“One of the company’s acquired in Russia was not yet on SAP so we are taking this opportunity to take Russia onto our European instance of S/4,” Kollepara said.

“This will start with Russia and then we will bring the rest of the European countries onto this same instance. This is going to be a three year journey.”

The need to look at a worldwide upgrade to S/4 HANA was driven by SAP’s long-term plans to end mainstream maintenance for pre-S/4 enterprise resource planning (ERP) systems in 2025.

SAP revealed this week that one in four customers worldwide has licensing agreements for S/4 HANA, meaning most are still on prior versions of the popular ERP.

“We know that SAP is publicising that by 2025 they’re coming to an end in terms of support and also we recognise that SAP is not investing anymore in both ECC [ERP Central Component], APO [Advanced Planning and Optimisation] and all of the legacy stack,” Kollepara said.

“What we did at that time was we partnered with Wipro and EY and we did a whole study in terms of end-to-end what it would take to move the whole of SAP ECC/APO and P2P [Procure to Pay] to SAP S/4 HANA,” Kollepara said.

In Asia Pacific, Kellogg’s appears to run SAP R/3 ECC 6.0 on AWS cloud, according to a presentation from April 2017.

The company has previously declined requests to discuss with iTnews the nature of its local SAP environment and AWS cloud work.

Alongside the S/4 HANA upgrade, Kellogg’s has active programs of work underway to improve supply chain planning as well as what it calls “SKU to market”, which is essentially about digitising product lifecycle management and shortening the time taken to get a product from concept to retail shelf.

It is also pursuing a body of work under what it calls “smart factories”, which Kollepara said encompassed several years of efforts.

“We’ve made several investments into factories in the past and we still have several of our business processes [there] that are paper-based,” he said.

“We are taking this opportunity to change the whole user experience within the factory and we are digitising the factory business process.

“The key technology we are using here is SAP MII [Manufacturing Integration and Intelligence].”

It appears some of the smart factory work could be applicable in an Australian context although this remains in discussion.

Ry Crozier travelled to SAP’s SAPPHIRE 2019 conference in Orlando as a guest of SAP.