It's not a BlackBerry World anymore 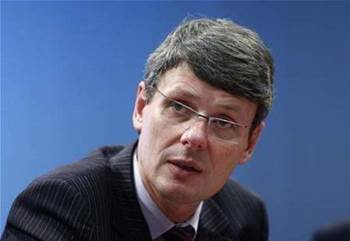 Must-attend event slips off the radar.

When Mike Lazaridis and Jim Balsillie were running Research In Motion, BlackBerry World was a chest-thumping celebration of RIM's successes and a showcase for the innovations that would assure its continued dominance.

Their successor Thorsten Heins will preside over a very different event.

Five months after replacing the longstanding co-CEOs, Heins desperately needs more time to right the now-struggling company and he likely has next to nothing concrete to offer his restless audience in terms of new products and services.

In late March, Heins embarked on a strategic review of the Canadian smartphone maker's direction in an effort to reverse the growing power of Apple and Google's Android, and to thwart a budding Microsoft/Nokia resurgence.

The company is working furiously to get a next-generation lineup of smartphones on sale, while also seeking licensing deals, partnerships and cost savings of US$1 billion this year.

Unless Heins has a big surprise up his sleeve at this year's BlackBerry World, held next week in Orlando, Florida, analysts expect him to focus on products and services already in market. Most of them have so far failed to capture the imagination of investors or consumers.

"It's too early in RIM's strategic review process to announce one particular strategy," IDC analyst Kevin Restivo said. "However, Heins would be wise to provide any kind of news to help staunch the bleeding."

Restivo expects RIM to tout any progress it's made in attracting developers and possibly announce a PlayBook that connects to cellular networks. That would make the 7-inch tablet more portable and give carriers an incentive to promote the device.

BlackBerry World - which brings together several thousand RIM partners and customers - was once a must for financial analysts. But this year few are making the trip, in part because RIM has broken with tradition by cancelling a specific presentation for them. Instead it delayed the briefing until the next-generation BlackBerry 10s are on sale, sometime later this year.

In the year since RIM's last Orlando conference, the company has issued a string of disappointing financial results, suffered an embarrassing global network outage and watched its share price tumble by 75 percent.

"Expectations are so low I don't think it's possible to disappoint investors," said National Bank Financial analyst Kris Thompson. "The conference isn't for investors anyway; it's for customers, developers and partners."

Thompson said RIM may use the event to introduce a marketing chief, which he said was long overdue. RIM is also seeking a chief operating officer.

"The company needs to display confidence and staying power at the show to keep this constituency loyal until the BlackBerry 10 smartphones are launched," he said.

Other RIM watchers privately pointed to subdued comments from a major investor and new board member last week as a hint not to expect much. Prem Watsa, who joined RIM's board in January's reshuffle, said that a turnaround could take three to five years.

The BlackBerry 10 devices will be RIM's first smartphones to make use of a hardy operating platform from QNX Software, an Ottawa, Ontario-based company that RIM acquired in 2010.

RIM's first test of QNX was its PlayBook tablet, which has languished on store shelves since its launch a year ago. The company is eager to get software developers to build PlayBook applications that could then populate an app store for the new phones.

On the sidelines of BlackBerry World, the company will hand out a prototype BlackBerry 10 device for developers to test their software applications. RIM has stressed that the device's hardware bears no relation to the finished product.

The BlackBerry was once seen as an indispensable business tool but has been eclipsed by more consumer-focused iPhones and Android devices which boast large, vivid touchscreens and hundreds of thousands more applications and games.

RIM had an 8.8 percent slice of the global smartphone market in the fourth quarter, according to research firm Gartner, down from 14.6 percent a year ago. Apple and Android smartphones accounted for almost three-quarters of the market, up from less than half a year earlier.

Meanwhile, a partnership between Microsoft Corp and Nokia Oyj threatens both RIM's corporate heartland and its recent growth markets internationally.

By the time RIM launches its first BlackBerry 10s, its global share could slip to 6 percent, analysts at Canaccord Genuity said in February. They said the small base would make it difficult for RIM to create an ecosystem of applications and content for its new platform.

Recognising it is powerless to stop iPhones and Android devices from invading its once-inpenetrable corporate and government business, RIM launched its Mobile Fusion software to enable IT managers to control those devices through RIM's servers. But it has so far failed to go further.

Sources told Reuters last month that former co-chief executive Balsillie had worked for months on a radical shift in RIM's strategy that would have offered use of its proprietary network, including its popular BlackBerry Messenger chat program, for rival devices such as the iPhone.

Heins has since said he believes in RIM's integrated model - in which it runs its own software on its own devices connected exclusively to its global peer-to-peer network - but that he would consider offering that via partnership.