IT leaders will guide firms through testing times 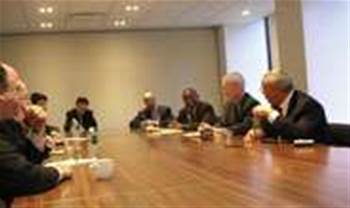 CIOs' knowledge of both the business and IT systems puts them in a strong position to help their employers adapt and survive in the current tough economic climate, according to a study by CIO Connect.

The research, released today by the IT leader group, polled CIOs on how their role was changing, and found that 80 per cent hold board level or operating committee positions, and that almost two thirds of all respondents - 62 per cent - believed that their board-level colleagues were "increasingly turning to them for insight and leadership in business change."

CIO Connect found that for just under half of respondents, a praised skill was their broad and informed knowledge of how technology can help deliver business benefits.

These CIOs believed that business change was a fundamental part of their role, while the remaining 50 per cent believed that their role was more about delivering new business applications or managing the delivery of enterprise IT services.

”We are seeing CIOs emerging to take a leadership role in driving business change within their organisations,” said Nick Kirkland, chief executive at CIO Connect.

“The role is pivotal, and no more so than today with so much business turbulence. The CIO is well positioned to interpret how their organisation best addresses the complexities of an economic downturn; the avoidance of disruption in any resulting organisational restructuring; the challenge of globalisation; and the sustained business and social changes that are being forecast for the coming years.”

Current concerns for CIOs include executive demands for increased value, and cost containment - for 70 per cent and 45 per cent respectively - and 40 per cent of CIOs expect their budget to remain unchanged in 2009.

Those polled said that unrealistic expectations of business stakeholders and the lack of clarity about future business needs (43 per cent) are the biggest barriers to more effective outcomes from executive engagement.

Alistair Russell, development director at CIO Connect, said CIOs will need to adapt and manage these barriers, and should draw on their existing skills.

"We’ve seen a rise in popularity among organisations for CIO executives with backgrounds that are strong on business leadership skills and with experience that has been fashioned mostly outside their current organisations" he said.

"Many CIOs will want to offer the important blend of technology know-how, business acumen and commercial awareness, as it is one reason why the CIO is seen to be capable of shaping and driving strategy at the executive level. Of all executive functional heads, the CIO has the broadest enterprise-wide view of operational business processes and activities, and is best placed to fully appreciate the increasing role in business of technology-enabled change."
Got a news tip for our journalists? Share it with us anonymously here.
Copyright © 2010 Computing
Tags:
firmsguideitleadersstrategytestingthroughtimeswill