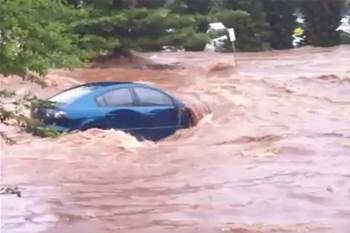 How comms networks are holding up.

Internet service providers nationally have warned of wholesale provider outages in the wake of the Queensland flood crisis, with at least one fibre link cut and DSL services in several cities out.

A major fibre cable linking Sydney and Brisbane is known to have been severed by the floods.

The cut has forced ISPs including Internode and iiNet to run broadband services using a non-redundant network configuration; that is, pushing all traffic across a single link.

Status advisories indicated that the severed cable would not be repaired until flood waters subsided, which could be "several days".

"Our wholesale provider has advised that technicians are unable to attend the break due to the flooding," iiNet said in a status advisory note.

Both iiNet and Internode indicated the break was not causing packet loss but they warned that flood damage to the remaining diverse fibre route could cause broadband service issues in parts of the state.

"At this stage we have no reason to expect widespread outages, but we cannot discount the possibility," Internode said.

"We are publishing this advisory to assist customers who may need to carry out internal preparations for potential service interruptions."

ISP MyNetFone warned that technical resources were being diverted to deal with flood-affected services.

"The recent flooding affecting most of Queensland has caused large-scale service disruptions throughout this region and a large number of communication technicians from other areas have volunteered to collaborate with local technicians to work on restoring the services within the affected area," MyNetFone said.

"These disruptions to the services of our broadband wholesale suppliers may have an adverse impact on MyNetFone's broadband service delivery and fault restoration."

ISP Exetel reported that all broadband services in the Toowoomba exchange were out. Like others, it did not know when services would be restored.

"All services that connect to the Toowoomba exchange are currently offline due to localised flooding," Exetel said.

"The floods are affecting Ethernet over copper and DSL services

"Our supplier [AAPT] needs to wait till flood waters go down before they have access to the site."

Telstra has tonight reported the known extent of damage to its telecommunications infrastructure.

The telco said that network assets in Toowoomba and the Darling Downs had been damaged and were still "too dangerous to access."

It also said the Grantham exchange - 45 kilometres east of Toowoomba - had been "severely impacted".

"Damage needs to be assessed but this is hindered due to crews being unable to access the site," Telstra's service delivery director for the Northern Region, John Parkin, said in a blog post.

The Grantham and Withcott communities were without landline or mobile access; Murphy's Creek and Westbrook were without ADSL; and Helidon, Gatton and surrounds were also experiencing problems with landlines, Parkin said.

Telstra was also dealing with cuts to mains power, with a "handful" of base stations operating on battery back-up, a spokesman told iTnews.

"The network is holding up well," he said.

Telco Optus has also been forced to run some mobile phone towers on battery back-ups.

A spokesman for the telco also said it had shipped in generators to help deal with mains power outages caused by the floods.

The spokesman said that three towers around Toowoomba - at Helidon, Gatton and Gunters Hill - were without power, and towers in the Lockyer Valley were also on battery back-up.

However, it had been unable to enter the valley with generators due to the "extreme flooding" - and it warned Optus users they would likely lose all services.

Optus said voice and data services in Toowoomba were operational.

"While Optus' equipment at the Toowoomba exchange has not been affected, residential and business customers may experience a service disruption due to flood damage within their premises," the spokesman said.

Engineers were said to be monitoring the situation as it developed.

The city of Brisbane was bracing for its worst floods since 1893 with reports of panic-buying in supermarkets and a mass exodus from low-lying areas.

Up to 40,000 homes are potentially in danger and power is expected to be cut to about 100,000 homes, according to reports in the Brisbane Times.

Telcos have reported some congestion on mobile networks in the city and urged residents to use the network sparingly.

"There are no known significant impacts at this stage in Brisbane and surrounding areas," Telstra's Parkin said.

"We are seeing some network congestion, and would remind customers to limit calls during this time."

Optus likewise reported "some congestion on the mobile network due to the high rate of calls within and surrounding the Brisbane CBD".

Internode said it expected "some localities in the Brisbane area will experience small-scale service outages due to local power interruptions or cable wash-outs."

Queensland's IT community was already pitching in, in a bid to keep communications services online.

iTnews reported that one man was mirroring flood information from a faltering Brisbane City Council website, and others had opened WiFi channels in their neighbourhood whilst mobile signal was choked.

Stay tuned to iTnews for more on this developing story.