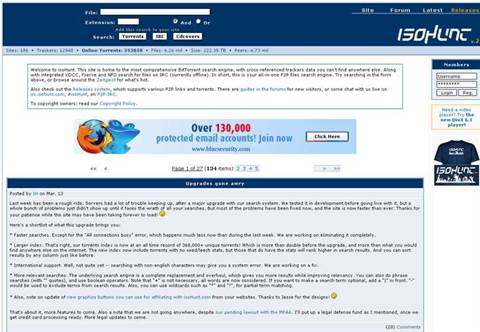 Popular BitTorrent search engine IsoHunt remains off the air after its hosting services were suspended two days ago.

In a note posted on its website, IsoHunt staff alleged that lawyers from its primary ISP “decided to pull our plug without any advance notice.”

The move was “no doubt related to our lawsuit brought by the MPAA [Motion Picture Association of America], staff said, referring to February 23 2006 case filed against IsoHunt and six other filesharing service providers for allegedly enabling users of Newsgroups to easily find and download illegal content.

In an update posted yesterday, IsoHunt also denied current Net rumours that the site was in the process of moving its servers from the US to Sweden to avoid the suit.

“[We] have no intention of hiding our servers… BitTorrent was created for distribution of any large media file, and we stand by that ideal as a search engine and aggregator,” the site said.

“Depending on whether we get our servers back in the US, we will be back in full operation sooner or later.”

As reported on iTnews in March, IsoHunt owner and webmaster, Gary Fung, acknowledged that his search engine helped in the distribution of copyrighted material, but argued that the act of doing so was not itself wrong.

“Nowadays, everything is copyrighted on creation, by default,” Fung argued. “Open source software relies on licenses which are based on copyright laws, and software like Linux proactively uses BitTorrent for distribution of operating system images.

The site is currently seeking donations via PayPal, however it stresses that the donations will be used for the operational costs of its servers and development of our websites, not for a legal defence fund.