Is the digital dividend a billion dollar windfall?

Department of Broadband and the ACMA prepare for the spectral future.

After years of preparation, the communications regulator is set to auction off the digital dividend auction in November next year. David Havyatt runs his eyes over the numbers.

The Australian Communications and Media Authority (ACMA) and Senator Stephen Conroy have commenced the formal phases for auctioning off the digital dividend spectrum.

Federal Government never comments in advance on how much they expect to raise from these auctions - they argue it distorts the market - though an estimate is made and is included in forward estimates.

Information provided by Andrew Maurer from the Department of Broadband, Communications and the Digital Economy indicates the proceeds could range between $900 million to as much as $4.5 billion. While the latter number seems big, it is at the bottom of the range of $4-6 billion that it is believed some in Treasury and Finance are hoping for.

The ACMA's recent spectrum Tune-Up forum focused on the auction. Its name, "digital dividend", originally referred to those parts of the 700 MHz (broadcasting services) band freed up by the conversion to digital television.

As it relates to the auction it also refers to the 2.5 GHz band spectrum that the ACMA is recovering by relocating the television networks' Electronic News Gathering service.

The formalities were initiated last week when Senator Conroy made spectrum reallocation declarations for each band. The consequence of these will be 45 MHz of paired 700 MHz spectrum being available from December 31, 2014 and 70 MHz of paired 2.5 GHz spectrum from September 30, 2014.

This is nearly five times as much spectrum as the 25 MHz of paired 900 MHz spectrum used by the three major mobile carriers together for the launch of GSM in 1992.

In his presentation on spectrum policy context, DBCDE's Maurer included information on other recent auctions in these bands. These showed the prices in the standard manner of price per MHz, per head of population, against a time scale of when the auctions were held. 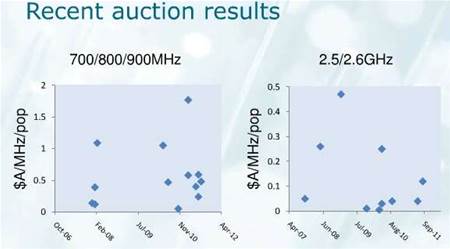 A lot of factors influence price, including availability of other spectrum, auction design, whether there are additional commitments required (like "must build" conditions). The higher value of the 700 MHz reflects how much better it is for coverage, especially in-building coverage.

From these, we can identify a low, medium and high price point for each band. Multiplying by the bandwidth available in each (90 MHz and 140 MHz because it it is paired spectrum) and a population of 22 million people we can get a total value.

Under the law the communications minister may place "competition limits" on how much spectrum any provider can acquire.

In the previous spectrum auctions suitable for mobiles (850MHz, 1.8 GHz and 2 GHz) limits were placed on how much spectrum could be acquired by any one bidder. These rules were set to ensure at least one person outside the existing operators would win spectrum.

These will be determined by Senator Conroy in early 2012. In previous cases the minister has asked the ACCC for advice, which has in turned consulted on the matter, but there is no obligation to do so.

Speculation abounds on whether there is any likely new entrant. Everyone's favourite global brands get a mention – like Google and Apple. But, apart from the US where Google bid for and lost a chance at 700 MHz, they haven't shown much interest elsewhere.

In New Zealand, the digital dividend has spurred at least one new mobile entrant but given the outcome for One.Tel and Hutchison here, it appears to be a big challenge to enter the Australian market.

If there is a lack of new entrants, the amount raised will be much closer to the lower end of the ranges quoted above.

Preparing for the auctions

Auctioning spectrum is not simply a matter of listing it on eBay, unfortunately. There is a whole theory on how to conduct auctions to ensure both an efficient allocation (the spectrum goes to the person who values it most highly) and that ensure the best return for the vendor (that is us as citizens who own it).

The very best designs are, however, computationally complex and, even more significantly, time exhaustive. The ACMA has decided to use a combinatorial clock auction, which focuses on specific combinations of spectrum and not just a quantity of something you want to acquire.

The ACMA's economist neatly compared it to an auction of shoes where each shoe is auctioned individually. A buyer really wants a left and right in the same size, colour and style.

The mobile operators need bandwidth of 20 MHz to deploy LTE but they don't just want any 20 MHz spread across the whole of the bands; they want in in contiguous lots; the recent trades between Vodafone and the railways were for this reason in the 1.8GHz band. A bidder will place a higher value on two contiguous 10 MHz bands than twice the value of one 10 MHz band.

The combinatorial clock auction first works out first how much of each band is an efficient allocation and then the maximum premium obtained from different arrangements.

While the spectrum only has to be cleared by late 2014, the ACMA will be conducting the auctions in late 2012. Power Auctions LLC will be contracted to provide the auction capability.