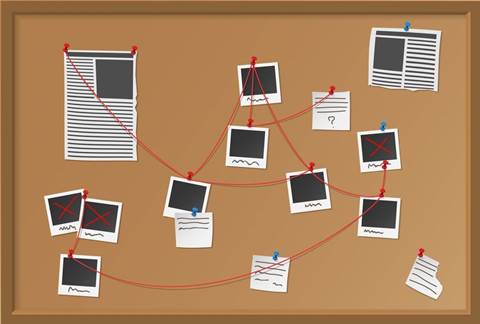 Red string linking photos of victims, suspects and evidence coupled with timelines on a whiteboard may soon be memorialised in crime procedurals, as investigators turn to digital narrative tech to build a case.

Developed by researchers at the University of South Australia (UniSA), along with the Data to Decisions Cooperative Research Centre (D2D CRC), digital storytelling processes help investigators and prosecutors cut through the deluge of multimedia data and evidence.

Following the conclusion of the CRC’s five-year lifespan on the weekend, the UniSA researchers have turned to process automation company Genix Ventures to further commercialise and develop the narrative visualisation technology.

Just as data visualisation can highlight the successes and weaknesses of a business, narrative visualisation, as the system is called, constructs a single, cohesive view of a criminal case, making it easier for legal authorities to follow.

“The narrative visualisation technology conveys a narrative by describing an investigation from the initial reporting of a crime to the final prosecution, highlighting important dates, times, people and events complemented by visual evidence and other important information,” project collaborator Andrew Cunningham said.

“This is all powered by a narrative engine that understands the wider context of the data, and how it relates to that narrative.”

This allows agents to view criminal cases with a focus on the multifaceted storylines of the people involves, instead of being limited by traditional representations that focus on a chronological display of information.

Former D2D CRC chief executive, Sanjay Mazumdar, said that the centre’s decision to support the project sprung from conversations with state and federal law enforcement agencies that highlighted the difficulties of data management and its impact on establishing a shared understanding of cases.

“We continued to hear that making sense of the deluge of information was a prohibitively complex process,” Mazumdar said.

“Narrative visualisation technology removes the factors that regularly overwhelm investigators needing to manage literally thousands of pieces of data and creates a single, interactive view of the entire investigation.”

Now that D2D CRC partner Genix has taken over the reins of commercialising the technology, the company is seeking to extend the platform beyond law enforcement and into other data-intensive sectors.

“This technology is unquestionably an exciting innovation that will have a real impact in the Australian law enforcement arena,” Genix Ventures managing director Steve Godinho said.

“But Genix also sees enormous potential for the technology to be used to streamline decision making in government agencies and industry, and this will be a key focus of our commercialisation activities.”