From peta to exa to zetta in five years.

This enormous number in fact represents a slowing growth rate, as the initial stages of internetworking expansion tapers off. 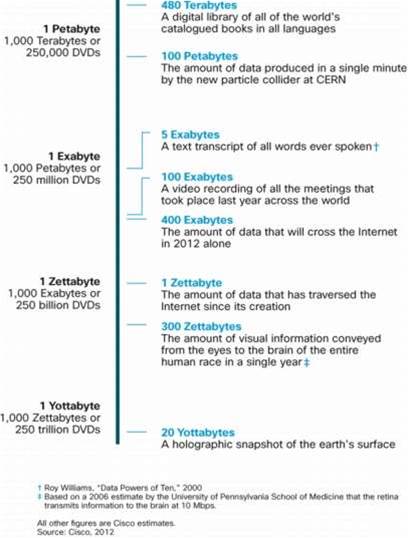 Video is seen as a major internet traffic driver, as is the increasing number of mobile devices such as smartphones and tablets. In 2016, 1.2 million video minutes will traverse the internet a second.

The internet will have some 18.9 billion network connections. This is two and a half connections per person on the planet and up from 10.3 billion in 2011.

The internet is expected to be not just bigger but faster in 2016, Cisco says. Average broadband speeds are thought to quadruple to 34Mbps. Only three percent of connections in 2016 will reach 100Mbps however.

Cisco expects Australian internet traffic to hit 25 petabytes per day in 2016, which is up six times on 2011. Australia is seen by Cisco as one of the fastest growing countries amongst the sixteen featured in the Visual Networking Index.

The NBN will help Australian broadband speeds to keep up with the Joneses at 36Mbps by then and nine out ten of the 23 million-strong population are thought to have 142 million network connected devices, or 5.7 each.